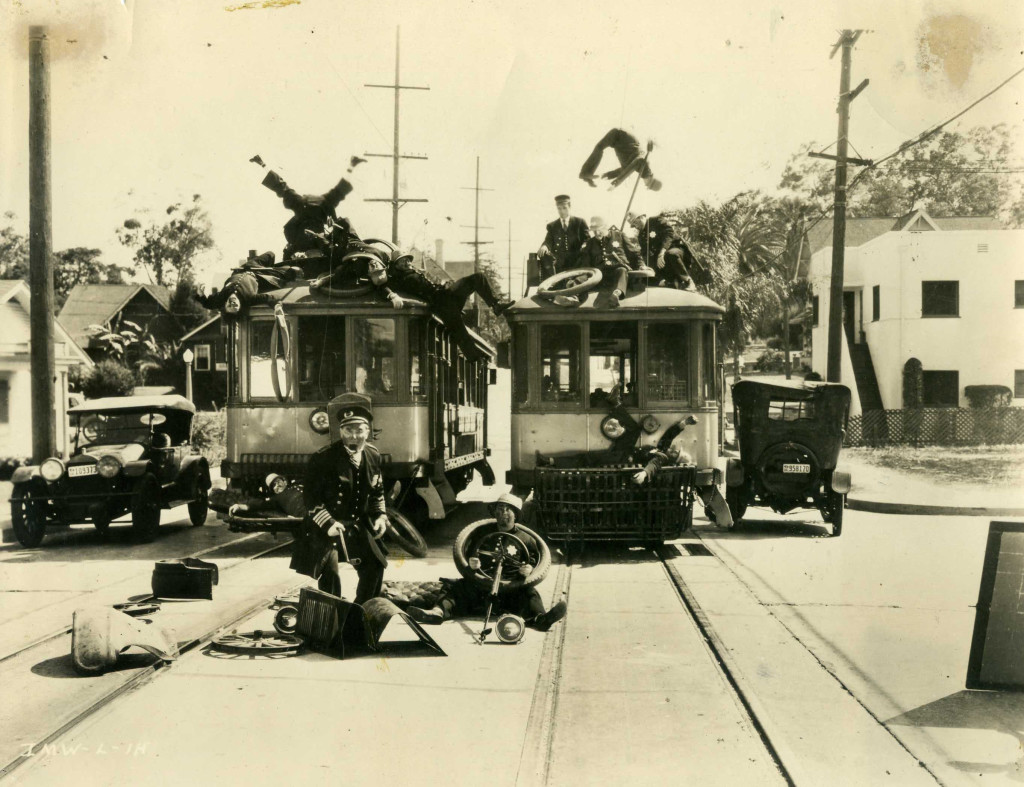 This remarkable photograph from a Keystone Cops silent film made around 1918 shows Los Angeles Railway “Maggies” nos. 7 and 1 putting the “squeeze” on an early Model T Ford. Both cars shine under the production company lights.

LARY owned about 45 “Maggies.” Over the years, most of the short little cars were rebuilt and converted to larger cars of at least three different types, with all the work being done by the master woodworkers at the company’s South Park Shops.

Several cars were converted to type B (Standard), type C (Sowbelly), and type F (Arch roof). By the 1930’s, only 8 “Maggies” remained in their last recognizable configuration. These surviving Maggies were a fixture of the short but hilly I Line that ran out west 1st Street and Beverly Blvd, to Bonnie Brea Street where connections could be made to the D line.

Principal braking for the Maggies was a magnetic brake shoe located between the wheels on the other wise standard arch-bar truck. The “fatal flaw” with this usually dependable braking system was that if the trolley pole left the overhead wire (“de-wire-ment”), the brakes were not worth a damn, and the motorman would have to spring into quick action and wind up the hand brake. This flaw would manifest itself one afternoon in 1939.

The City Of Los Angeles was planning to reconfigure the tricky intersection of Glendale and Beverly Blvds. where 2nd Street joined the fray. A new massive viaduct would span Glendale Blvd. and 2nd Street, both streets hosting busy Pacific Electric rail lines. The new viaduct did not include the rails of the LARY I Line, because the I Line was scheduled for abandonment by the end of 1939.

One afternoon in the early months of 1939, Maggie #1 was in bound for the Downtown terminal at 1st and Hill Streets. As the eastbound #1 crested the last hill at Grand Avenue, for unknown reasons, #1’s trolley pole left the wire. By the time the motorman realized what the HELL was going on, it was too late to wind up the hand brake and the long career of #1 came to a crashing end at 1st and Hill Streets.

All the surviving Maggies were scheduled for retirement with the I Line abandonment, and so, as skilled at LARY shop men were in rebuilding such accident damage, the #1 was scrapped on the spot.

Years later in the early 1960s it was brought to the attention of OERM members that a streetcar body was uncovered in a house located in Barstow. The house was to be demolished. While inspecting the car body trapped in the confines of the doomed house, it was discovered that, lo and behold, there was old Maggie #7. The #7 was “rescued” and now awaits restoration at OERM.

And so the two Maggies that came together for the Keystone Cops comedy would lead two very different, but noteworthy, lives.

UPDATE from Ralph: Here is LARY car #1031 at the end of the Edgeware Road line. The 1031 is on Douglass Street at Kensington Rd. The production crew and cameras for the Maggie shots was set up right where the 1031 sits in this 1946 Robert T. McVay photo. The apartments and craftsmen houses have change very little, if at all, in this historic zone. 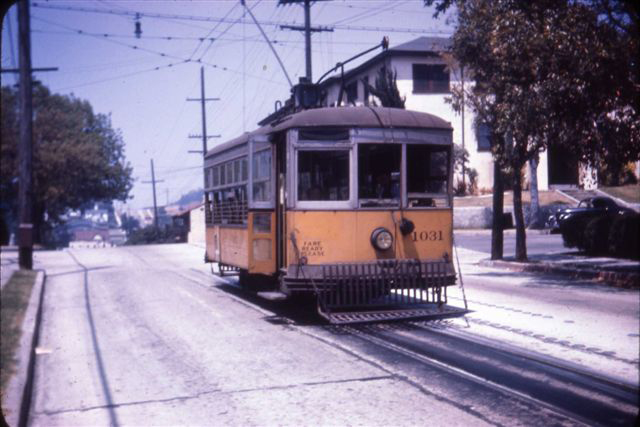