Last runs of any streetcar or interurban line is usually a sad, but uneventful occasion. However, that was not the case on Tuesday afternoon, September 29, 1953, when Pacific Electric car no. 5125 had the honor of making the last regular through run to Santa Monica and Ocean Park on the world famed Santa Monica Air Line.

As the 5125 and its merry band of railfans and a handful of regular riders approached the east end of Sentous Yard, the usually on-time run was abruptly brought to a halt by an idiot that had gotten his 1951 Chevrolet hung up on the Air Line’s 60 lb. “high iron.”

It seems that the guy was driving along La Cienega Blvd. when he spotted the RINGLING BROTHERS CIRCUS TRAIN stored on the tracks of PE’s Sentous Yard. The guy turned off of La Cienega =onto a narrow dirt along the south side of the yard. After doing a visual inspection of the long circus train, he found himself at the east end of the yard. With no room to turn his car around and not wanting to back down the narrow dirt road, he did what any nitwit with half a brain would do, and turned his car in the direction of Jefferson Blvd. which paralleled the yard on the north side of the tracks.

The spot he chose to make this maneuver was not a designated RR crossing. He soon found himself and his nice Chevy hung up on PE’s high iron. Then along comes the 5125 making its historic last run. The Hollywood cars could clip along at a brisk 45 mph, but on this somber occasion, the 5125 was roiling along at about 25 mph as nobody on board was in any hurry to get to Ocean Park.

The 5125 rolled to a stop and the two accompanying photos tell the “rest of the story.” It was “all hands on deck”, railfans and regular passengers alike. Railfans Ray Ballash and Jack Ferrier look on in the first image. With much grinding gears, spinning tires, dust, and heavy lifting, the Chevy was finally freed from its captivity.

Had something like this occurred on, say, the Santa Ana or Newport Beach lines with a magnificent “Buttefly 12” bearing down on this scene at 60 MPH-plus, the man and his Chevy might have had a far worse outcome to this situation other then just an embarrassing moment! 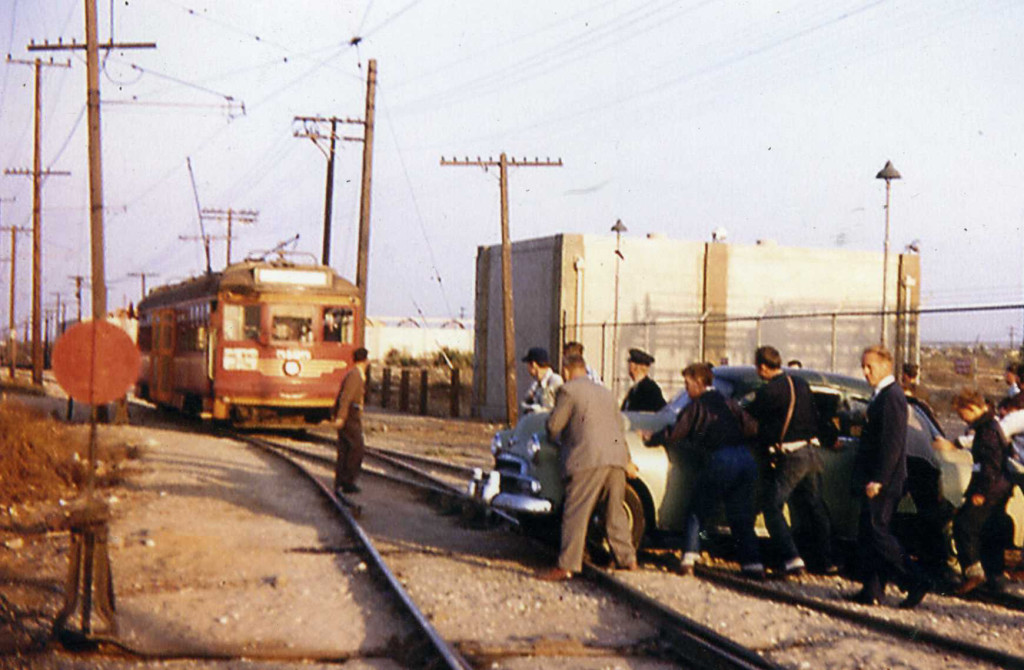 At length, the 5125 continued on to Ocean Park with out incident. Later that evening the 5125 and its crew and railfans returned to 6th & Main. The Air Line car usually spent the night on a spur across the street from the Ocean Park Car House (by now an all-bus facility). In happier days, the 5125 would return to LA on its early morning run.

But that was not to be. The following day, there was no morning run out of Ocean Park. The morning Air Line car departed 6th & Main instead and only operated to 11th Ave. and Exposition Blvd. just west of Vermont. The direction of the car was reversed and it returned to 6th & Main, The end had come to this historic operation.

On October 1, 1953, all of PE’s passenger service, both rail and motor coach, was sold top the “cut throat” cooperation, Metropolitan Coach Lines. The Santa Monica Air Line was not excluded in the sale, and so the truncated Santa Monica Air Line would become the very last PE passenger service, such as it was, and that ended on the last day of October 1953. The 5125 met its end a few years later in the mass Hollywood car scrapping of 1956.

In the image bwlow, there can be seen a square cement building. That building still stands to day in a Los Angeles Department of Water and Power (DWP) electrical switching and maintenance yard. LAMTA’s Expo Metro Rail trains now pass this location at 55 MPH.

The period photos were taken by a then-15-year-old Roger L. Titus. Abandonment notice from the Alan Weeks collection.