Pride of the PE: The New PCCs 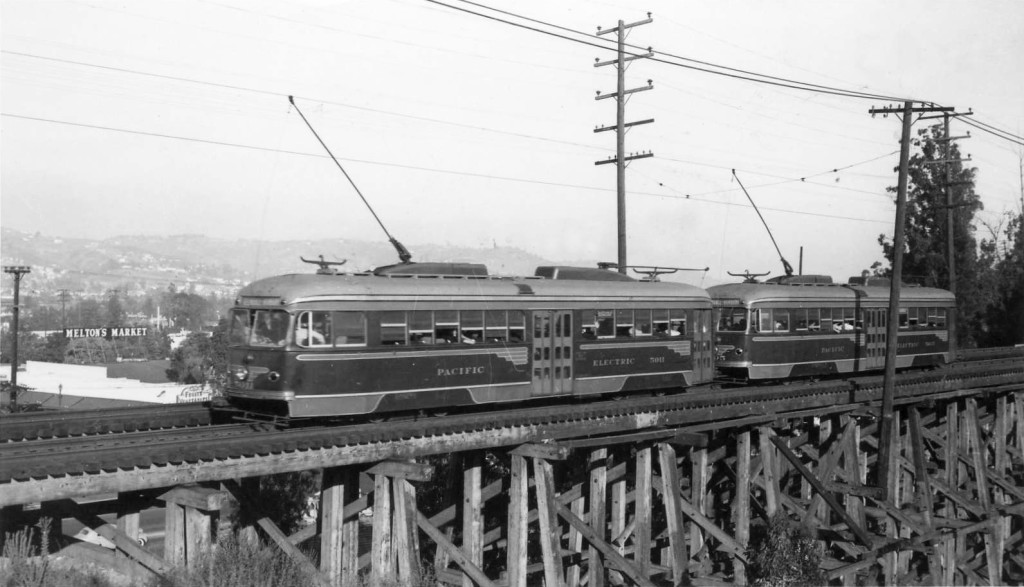 When the Pacific Electric Railway took delivery of their 30 new Pullman Standard MU PCCs in November of 1940, the Railway was the talk of the transit industry. The whole idea behind the development of the PCC was to mass produce a modern “standard” single-end transit vehicle that would be virtually identical in every respect. The only differences envisioned by the Electric Railway Presidents Conference Committee (ER-PCC) was to be in the various paint schemes of the transit companies that would be smart enough to order these streamline vehicles. This production practice held true for the first four years of PCC production. Then in the latter half of 1940, the Pacific Electric Railway re-wrote the PCC Production Manual.

From its introduction in 1936, the St. Louis Car Company was receiving the lion’s share of PCC orders. Indeed, by mid-1940, Pullman Standard had delivered only 61 PCCs to just three operators, while St. Louis Car Co. was building and delivering PCCs by the hundreds to several operators. The only mechanical differences in the cars produced was electrical equipment. The cars could be ordered with either WESTINGHOUSE or GENERAL ELECTRIC equipment. Other than that, all PCCs built up to the PE’s order were “off the shelf” models.

Pacific Electric’s PCCs broke the mold for damn sure. These 30 cars were the longest at over 50 feet; the standard to that time was 46 feet. PE’s PCCs were DOUBLE-ENDED; all PCCs built up to that time were single-ended. And the topper: the PE’s PCCs were built for Multiple Unit operation of up to 3 cars. The American transit industry was stunned, to say the least.

PE’s revolutionary PCCs set the stage for “Special Order PCC” production across the USA. The above photo of cars 5011 and 5005 was taken by the late Bob Burrowes in January 1941. The virtually new cars were the “Pride Of The PE” and the talk of the transit industry. With the outbreak of World War II, the 30 cars could not have come at a more opportune time. Their limelight would last just 15 years.

In late 1953, PE passenger operations fell into the evil clutches of Metropolitan Coach Lines, a private enterprise whose greedy practices mirrored that of National City Lines. After just 14 and a half years of operation, and with decades of service remaining, the most beautiful PCCs ever built were replaced by inferior bus service in June 1955. The cars were placed in storage, in the dank Subway Tunnel. There, they would rot until sold to Buenos Aires in the summer of 1959.

error: Please, no downloads.
Hollywood Cars at the Alamo: The Watts LineRalph Cantos Collection, Southern District
Only the 736 Will SurviveWestern District