Hollywood Cars at the Alamo: The Watts Line 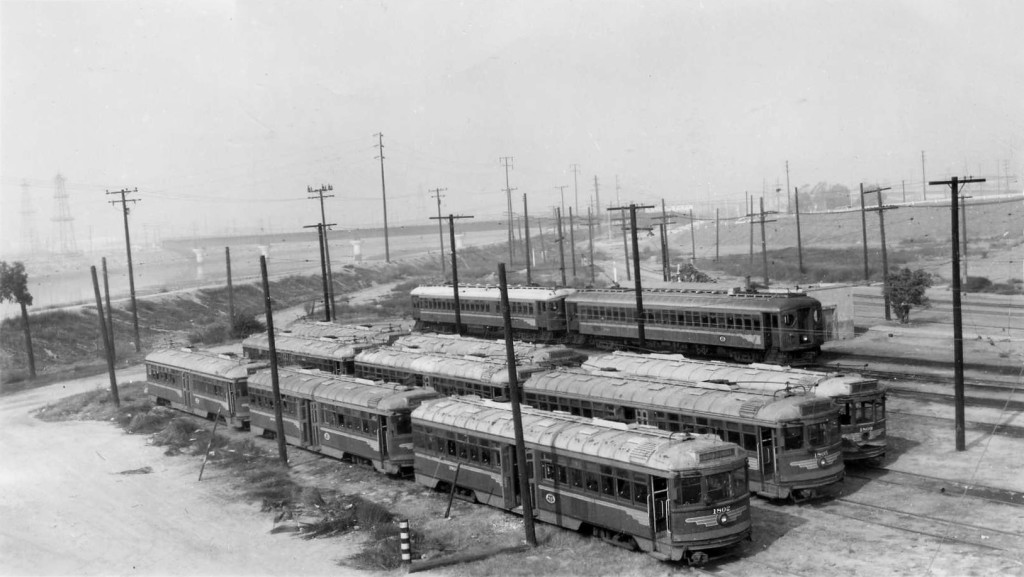 As the morning sun came up over Southern California on New Years Day, January 2, 1950, the Pacific Electric did what it had done for several decades — that was, to move thousands of Angelenos heading to the Rose Parade aboard fast, comfortable, well maintained 3-car trains. About the only class of cars not heading for Pasadena that morning were the PCCs, the Echo Park 100s and the every trusty 950s.

For the remaining 1000s, all 1100s, 1200s and Blimps not needed for Southern District Holiday service schedules, and almost every serviceable Hollywood car, it “was all hands and cars on deck.” I am sure that passengers that historic morning riding comfortably aboard the cars could NEVER have imagined that this would be the last time that they would enjoy this mode of transportation to the Rose Parade.

1950 was a pivotal year for the Pacific Electric Railway and the Hollywood cars, and all the other rail cars that day. 1950 WAS “the beginning of the end” for the PE whose predominant mode of transport was by rail, and a viable passenger carrying enterprise.

Just nine short years later on New Years Day 1959, only 15 battered and neglected Hollywood cars provided service on the 7-mile Watts Local Line. Long gone were the 100s , 950s, 1000s, 1100s, and 1200s, the PCCs stored derelict inside the Subway Terminal tunnel. The once-mighty armada of 160 Hollywood cars was now down to just 15 cars, of which only 13 were serviceable. The cars were now under the ownership of the first LAMTA, an agency hell bent on total destruction of electric rail transportation in LA. The Watts line required 11 cars for the weekday rush hour service (5 two-car trains and 1 spare). And so, like the brave men at the Alamo fighting against insurmountable odds, the last Hollywood cars were over run by hordes of invading buses. It was “The Last Stand” for these wonderful, durable cars.

I took the above photo in February 1960 at Morgan Yard. The last nine Hollywood cars wait for the inevitable, the last mile to the front gates of National Metals & Steel on Terminal Island. Cars 1802, 1801, and 1809 are closest to the camera. If you look closely, the right front of 1809 has damage to the front door and dasher. When the Watts Line was abandoned in November of 1959, only ONE spare car was available to fight on; 1809 was mortally injured in a grade crossing accident just 3 months before abandonment. These fine cars had put a great fight but were done in by overwhelming odds.