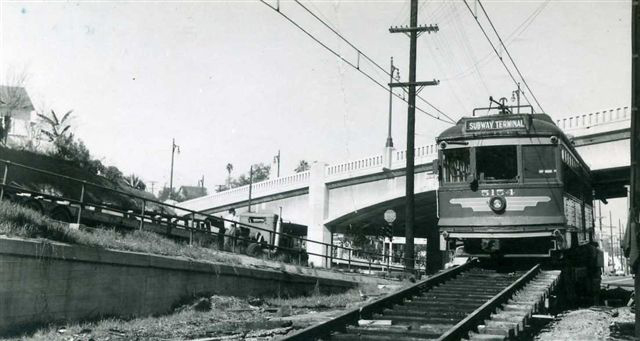 This very sad photo was taken in November of 1955 at the entrance of PE’s Subway Tunnel. Car 5154, the former no. 704 (BRILL 1925) is being made ready for its trip to National Metals & Steel on Terminal Island for scrapping.

What makes this photo so sad is that the 5154 had several decades of serviceable life remaining in its car body. In 1939-40, the PE spent hundreds of thousands dollars, all of it private capital, to completely re-manufacture the 160 Hollywood cars to “better than new” condition. This rebuild brought the Hollywood cars up to PCC standards of speed, comfort and safety. Then in 1949-50, the PE again spent thousands of dollars per car to bring 131 Hollywood cars up to the highest and latest safety standards.

When the last car (no. 5181) left Torrance Shops in mid-1950, its condition was so excellent, it was ready to render the traveling public three to possible four more decades of dependable, comfortable service. And yet, here we see car 5154 literally in prime, mint overall condition, and just five years from its last overhaul, being treated like so much scrap metal.

When the Glendale – Burbank line was abandoned on June 19, 1955, 15 Hollywood cars were working the line along side the 30 near new PCCs. Two cars, nos. 5166 and 5167, were mercifully saved from a trip to the scrap pile, and were trucked over to the Watts Line, where the two cars joined a ragtag assortment of low numbered 5100s (St. Louis Car Co. 1922). The two new arrivals at Watts became “the babies” of what remained of the last operable Hollywood cars. Not so fortunate was the 5154 and 12 other former 700s — they were DOOMED!

When the first Hollywood car was en route to Terminal Island, tied down to the back of the flatbed truck like some slaughtered animal, one of the trolley poles became dislodged from the hold down hook. The trolley pole reached up as if asking for help, pulled down phone wires as a result. So all the remaining cars making the final trip had both of their trolley poles spot welded to the roof guard. If you look closely, you can see that the trolley pole on the hapless 5154 is now welded down to the guard next to the pole hook. This was just the first of the horrors that awaited the 5154. And so this beautiful, handsome, 100%-complete and operable car, was just hours away from the end of its life — a sad, terrible waste of the finest suburban trolley cars this country would ever see.

And while this horrible scene was being played out at Toluca Yard, thousands of miles away in Buenos Aires, 27 other Hollywood cars would continue to roll along well into the 1980s.