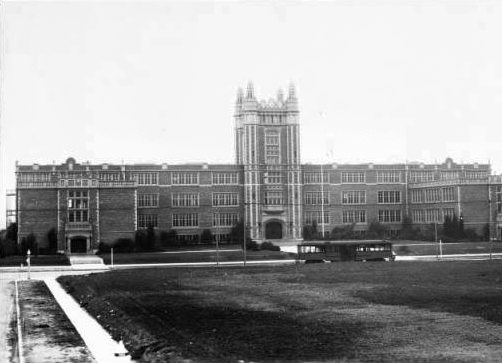 In this beautiful photo taken in 1925, the newly completed LA High School Main Building stands proud and majestic at the corner of West Olympic and Rimpau Blvds.

I believe at this time the L line was a money maker for the LARY. It certainly had the same ridership potential as the nearby P line just a short distance to the south.

But West Olympic Blvd. was in a constant state of improvement. Once known as West 10th Street, it only went as far west as Crenshaw Blvd. where the L line cars jogged over to Country Club Drive via Victoria Avenue and then back to the “new” Olympic Blvd that was being extended westward towards far-off Beverly Hills and Santa Monica.

n the early part of the 20th Century, Rimpau Blvd. was the “edge of town” where LARY car lines (including the L, P and W) ended. The PE’s Venice Short Line handled passengers heading for the “hinterlands” of Culver City, Palms, Mar Vista, Venice, and Santa Monica.

By 1940, the City of Los Angeles gave the LARY and the L line the “royal boot.” Major reconstruction of Olympic Blvd. was well under way, and the L line did not fit into LA’s “master plan” for its “automotive wonderland” then envisioned be City traffic “experts.” The L line was replaced by the “new and improved” motor coach line #90. I am more the sure that patrons of the L line would have preferred PCCs rather then jarring Yellow Coach Diesel Buses that were forced on them. The P line must have benefited greatly by this dreadful mistake made by traffic “experts.”

As a final note, the beautiful Main Building of Los Angeles High was severely damaged in the 1971 earthquake, and sadly, was torn down sometime in the mid-1970’s to be replaced by a modern box-like building, probably designed by the same “experts” the City of LA had in its Planning Department.