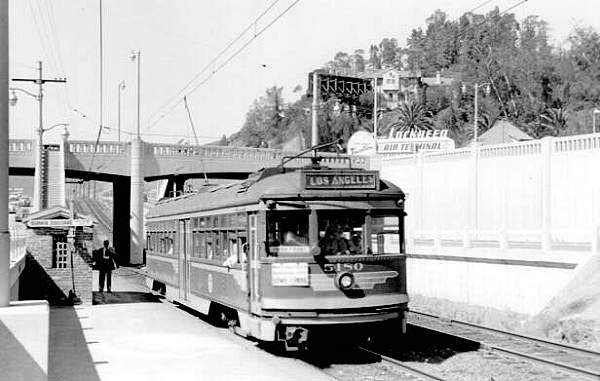 Pacific Electric’s 160 Hollywood cars served the Railway above and beyond all expectations on the far-flung system. Except for the Northern Districts, San Bernardino Line, and the Southern Districts (Santa Ana, San Pedro, Catalina, and Long Beach Lines), the Hollywood cars roamed the PE rail system like a band of nomads.

As far and wide as the Hollywood cars roomed, there was ORDER to their diverse assignments, especially after World War II. The PE seemed to assign “blocks” of sequentially numbered cars to specific lines. Although there may have been exceptions, Hollywood car assignment seemed to go as follows, from what I have observed from years of photo research.

After the Santa Monica Blvd. line abandonment, cars 5130 to 5144 were not seen in service very much, if at all.

THEN THERE WAS THE SAN FERNANDO VALLEY line with cars 5169 to 5181 regularly assigned. With the December 1952 abandonment of the SFV line, cars 5169 to 5181, the cream of the crop, basically vanished from service. That left cars 5145 to 5168 serving the Wests last two lines.

Cars 5174 to 5181, were renumbered into various 5050 numbers to fill in the gaps left by the eight cars sold to Portland.

For reasons known only to the PE management, cars 5169 to 5181 were never seen again in service after the SFV line abandonment. The eight renumbered cars along with 5169 to 5173 were basically finished. The last 15 Hollywood cars assigned to the Burbank line were retired with that lines June 1955 abandonment. Two cars, 5166 and 5167 were transferred to the Watts line to bolster up that lines dwindling roster of serviceable cars.

And so in the nine years from 1950 to late 1959, the once great fleet of 160 Hollywood cars was whittled away, car by car, line by line, until the last nine battered and beaten cars serving the Watts line finally gave up the ghost. Five of the last nine cars were went to OERM with one car MTA #1805 being dismantled for parts.

Amazingly, two of the earliest Hollywood cars built wound up being the last to survive.