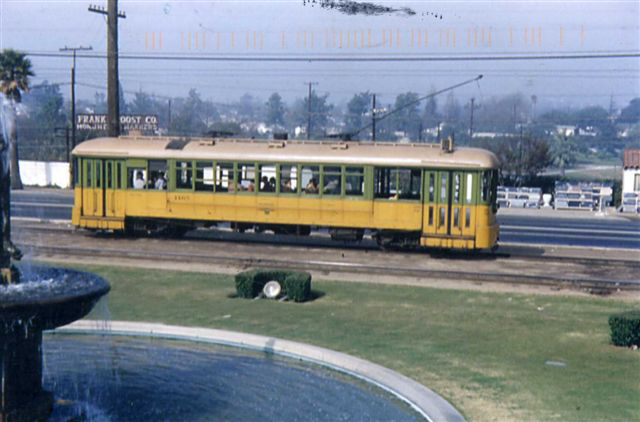 This beautiful photo was taken by the then-16-year-old Roger Titus. The date of this Fan Trip was November 7, 1954, and the 1165 poses for the camera at Inglewood Cemetery.

The 1165 looked really good considering that it had been in storage for so many years. I am sure that the Division 1 Shop forces must have washed the 1165 for the fan trip.

By this late date, the upcoming massive May 22, 1955 rail abandonment was a known fact. Not only were the days numbered for the 1165, but also rail lines 5, 7, 8, 9, F and the northend of the W Line. Also on borrowed time were the bulk of the H-4s and all of the homebuilt K-4 class cars still in service at this time.

The May 22 abandonment would result in a massive “streetcar house-cleaning” of almost 275 well-maintained cars. LATL would never send “shabby” looking equipment to scrap. What would the management of National Metals & Steel think if a bunch of junk showed up at their front gate? LATL management did have some degree of pride.

Happily, there were some “escapees” to the terrible fate that awaited most of these nice cars. Three of the last BF Standards were saved: 521 going to Sea Shore Trolley Museum, 525 was saved by the SC-ERA and moved to temporary storage at Travel Town, and the 536 was donated to the “Children of LA” by LATL and put on permanent display also at Travel Town.

In addition, the SC-ERA saved F class car 1160, joining the 525. Also saved was K-4 1559 by the PRS. H-4 1201 was donated to the children of Inglewood and put on display in Centinela Park. Within just a few days of being placed in the Park, the unguarded 1201 was reduced to a “dangerous fire trap” by the grateful youth of Inglewood that all but scrapped it on the spot!!

The 1201 was saved and joined the 525, 1160, and 1559. Also being saved at this precarious time was the 2601 which also headed for the “safe harbor” of Travel Town. Sadly, the 2501 was lost, at least as a complete car. A few years after being sent to Terminal Island for scrapping, a few private individuals put up the funds and the body of the 2501 was rescued and moved to OERM. H-4 car 1318 went to a Trolley Museum in Oregan. Lastly, about 60 H-4s were lightly refurbished and sent the grateful people of Seoul, South Korea were they would continue to operate for almost two more decades.

In the “What Goes Around, Comes Around Department” and “I told you so,” the new LAMTA Crenshaw – LAX light rail line will operate on former AT&SF track directly across the street from where this photo was taken. The new line will parallel the old 5 Line for more than a mile at this point.