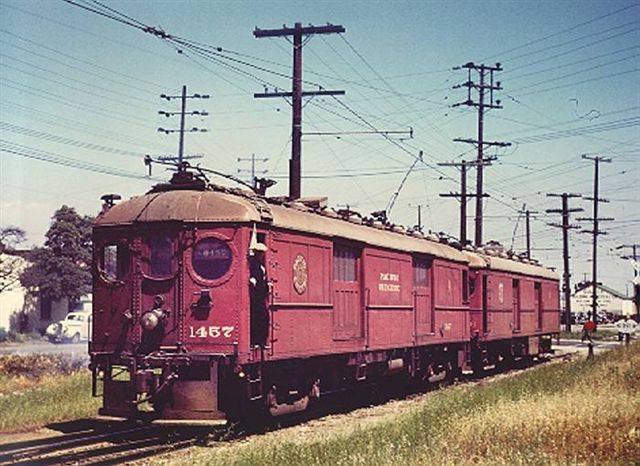 This fantastic faded shot of Pacific Electric Box Motors Nos. 1457 & 1458 working MU on the Santa Monica Air Line was taken about 1948. The two units have just crossed the Venice Short Line’s high iron at Culver Junction and are outbound to the Santa Monica Freight Station.

Before 1947, these 2 Box Motors could not work together as an MU train. PE added MU receptacles to the doors of both cars in 1947, necessitating lowering the position of the headlight. Business must have been good to require a two-box-motor train on this historic line.

In the back ground can be seen a white building. It was the CULVER BUILDING MATERIALS CO. PE serviced this company for many years. It was still standing until bulldozed away about 5 years ago to make way for the “NEW SANTA MONICA AIR LINE” (also known as the LAMTA’s EXPO LINE).

As I have said many times on the website , “what goes around, comes around” (sooner or later).