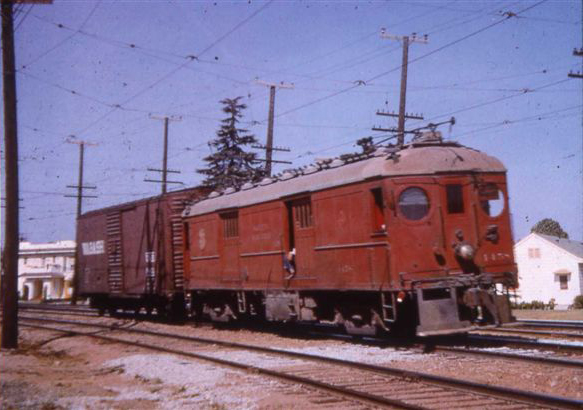 Box motor #1458 (Pullman Car Company 1913) rolls along the Northern Districts 4 tracks in this 1948 view. The 1458 was built new as a passenger car for Southern Pacific’s Portland electrified commuter rail operations. It was numbered #209.

By 1927 the passenger operations out of Portland was hemorrhaging vast amounts of Southern Pacific’s financial resources. Not even SP’s lucrative freight operations could compensate for the loses. The electrified passengers service was phased out over over a two-year period during 1928-29. The passenger car roster was in generally good condition despite years of “deferred” maintenance of operating in Portland.

PE purchased about 60 of the cars and had them towed to their Torrance shops. Eighteen of the elegant cars were put through the Company Shops at once and emerged in better than new condition as passenger cars nos. 1252 to 1262 by the end of 1929. (One car SP no. 477, would become the world-famous Pacific Electric no. 1299.)

Five of the cars became 1374-class “combos.” The remaining 44 or so cars would languish in open storage among the weeds of Torrance Shops’ “back 40”, and never turn a wheel again until towed to KAISER Steel in 1951 to be scrapped. (What a waste!)

As the years passed, PE’s freight business proved to be much more lucrative than the passenger service. In 1937, PE management ordered two of the rusting former SP passenger motor cars to be converted into badly needed box motors. Two cars, the former Portland nos. 208 and 209, were pulled from the weeds and into the Torrance Shops where the 2 cars were reincarnated into box motors nos. 1457 and 1458. When they emerged from the shops, the two cars bore little resemblance to their former passenger car appearance.

The two cars would more than earn their keep for the next 15 years until dieselization reduced the need for electric box motors to the vanishing point. The 1951 abandonment of the Northern District and the end of access to LAUPT via Aliso St. nailed the coffin shut on the bulk of PE box motor operations. What little was left on the Southern and Western districts would be gone in less than 2 years as well.

PE’s steel box motors 1457 – 1464 were taken to SP’s Alhambra Shops and scrapped in late 1953 and early 1954.
The wood bodied box motors of varying 1400-series numbers were hauled out to Indio where they were burned without air quality regulatory problems. A vast and highly profitable electrified freight business handled by a fleet of box motors disappeared in a matter of just 2 years. From 1953 onward, PE and SP diesel locomotives pulled freight trains and delivery trucks took care of the rest. In the end, the PACIFIC ELECTRIC name would vanish from the Southern California scene as well. 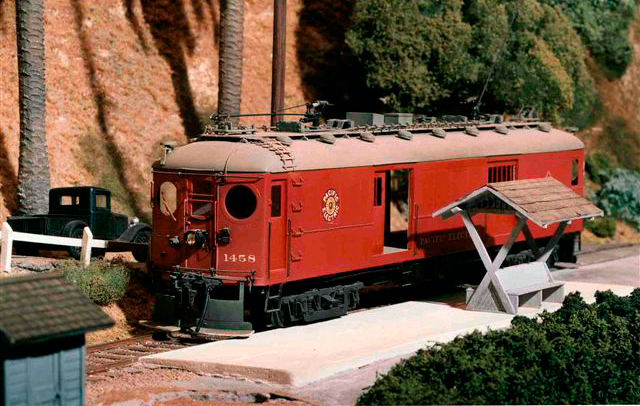 This superb O gauge model of box motor 1458 is owned by PE modeler Kim Herrington of Emeryville Calif. Notice that Kim’s model shows the 1458 just after it came out of the Torrance Shop rebuild in 1937. The headlight sits high on the door. In 1947, the PE added MU Receptacles to the front doors , necessitating lowering the headlight position as shown by the 1458 in the 1947 view. Kim took the photo and sent it to me.