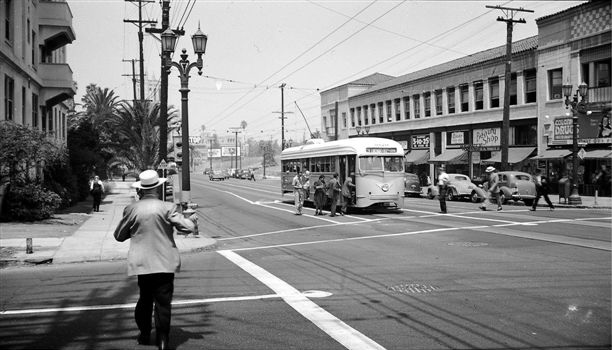 Los Angeles Transit Lines PCC no. 3029 is seen here working the 3 Line, stopped at 6th & Rampart Blvd. in the Spring of 1947. Trolley Bus overhead is up and bus stop signs are in place.

In just a few months, transit history will be made here in Los Angeles for the second time, and its nothing to be proud of.

The dubious distinction of abandoning the FIRST rail line with PCCs in America goes to our own beloved Pacific Electric, who “pulled the plug” on the East Broadway line in Glendale in 1946 (it had been PCC operated since 1941). August 3, 1947 would see the PCC-operated 3 Line change over to Trolley Bus operation, for better or worse. This abandonment represented a terrible blow to the esteem of the PCC in its bid to rescue rail lines across America.

Not long after the 3 Line fell to rubber-tired transit, the dignity of PCCs took another major hit when the PCCs of San Diego Electric Railway gave way to buses in one fell swoop in 1948. That dastardly deed was perpetrated by trolley hater Jessie L. Hough, who had purchased the San Diego Electric Railway just months before, wasting no time in dispatching the near-new PCCs into dead storage, to await sale to anyone smart enough to snap them up. That same SOB would scuttle the PCCs on the Glendale-Burbank a few years later.

The “RAILS TO RUBBER REVOLUTION” had begun and it was going to get ugly before things would get better a half-century later.