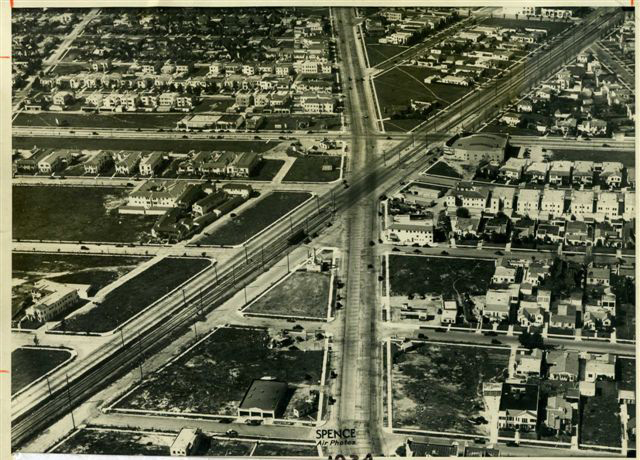 The shortest distance between two points is often described “as the crow flies.”

So it was in 1897. That’s when the Pasadena & Pacific Railway wanted to link parallel rail lines and one common destination with a crossover rail line. And the P & P Rwy. decided to go as the crow flew.

The object and reason for this crossover line was to provide a faster running time from Downtown LA to the cities of Santa Monica and Venice. Using the faster portion of the Venice Short Line to Vineyard Junction and then heading in a northwesterly direction, the Railway could link up with their rail line on Santa Monica Boulevard in the tiny town of Beverly (better known today as Beverly Hills).

From that point, their interurbans could roll along at mile-a-minute speeds in the open fields west of the Beverly Station, bypassing the horse and buggy congestion of Hollywood and Sherman, until reaching Santa Monica and Venice.

As was always the case in those early days of yesteryear, where ever the trolley rails went, a wagon trail was sure to follow. And as time passed, horse-drawn wagons turned into motor cars, and lots of them.

In this 1934 photo, a Pacific Electric 950-class interurban rolls towards Beverly Hills as it approaches the three-way intersection of San Vicente and West Olympic Boulevards at Fairfax Avenue. Auto traffic is light on this Sunday morning, and the 950 will not slow down as it blasts through the crossings with whistle blowing.

All of the apartment buildings shown here are still standing today, as is the “Green Spray Market” building in the upper right portion of this photo. Today, it’s a Hebrew School. The beautiful Carthay Circle Theater seen at the very top of the photo is long gone, replaced by a low rise office complex.

Today, the ghosts of interurbans past have come back to haunt this now very busy three-way intersection. Those once-peaceful wagon trails have turned into automotive quagmires. Thousands of daily commuters passing through this intersection in their modern autos must wonder “what the HELL were they thinking when they laid out this intersection?”

I doubt that any of them have a clue that many years ago, fast, efficient PE interurbans passed through this intersection. All they can do is admire the large trees in the grassy center divider through the dark-tinted windows of their 500HP BMWs as they crawl along at 5 MPH.

That grassy center divider with its beautiful trees don’t do jack to move auto traffic as did the rail line that once occupied it.