Pacific Electric No. 5120 at West Hollywood: “A dent of things to come” 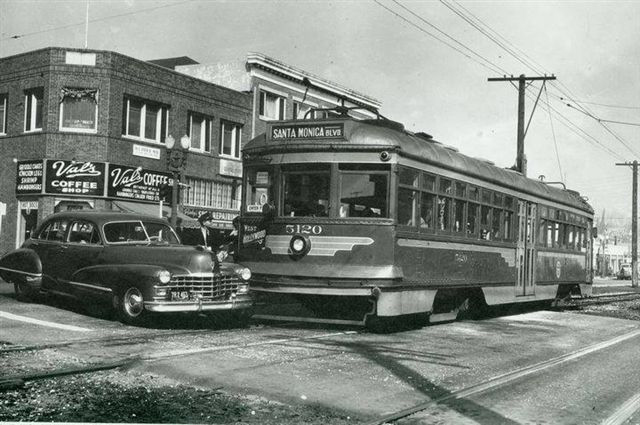 In a a scene  all to typical in  post-World War II Los Angeles, Hollywood car no. 5120’s “right of passage” is challenged by a 1947 Cadillac Fleetwood sedan. The motorman of 5120 looks over the damage to the Cadillac and will hand out “courtesy cards” to the few passengers that were still on the car so close to the end of the line, some 3 blocks to the west.   It’s a minor 1952  accident, and both the Cadillac and  the 5120 will live to fight another day.

But as more and more grade crossing accidents plague the Pacific Electric, City traffic officials looked upon the Red Cars as a scourge to the efficient movement of automobile traffic.

After the abandonment of the  Santa Monica Blvd. Line in early 1953, the 5120 was transferred to the Watts Line. The 5120 would continue to render excellent service, despite operating with little or no maintenance to its body and solely under the ownership of Metropolitan ROACH Lines, and the LA Many Trolley Abandonments. Under LAMTA, the 5120 would be renumbered 1809 in March of 1958.

Sadly, in the early months of 1959, the 1809 was involved in another crossing accident on the 4 tracks.  This time it was not a 1947 Cadillac, but a sizeable box truck.  Damage to the 1809 was bad, but easily repairable if an adequate body repair shop still existed on the Southern District. The 1809, with a bashed-in front door and anti-climber,  operated under its on power to Fairbanks Yard in Long Beach. There, the old girl would remain operable, but out of service until the Watts Line was abandoned in November of 1959. The 1809 would operate one last time from Fairbanks Yard over to Morgan Yard  (about 1 mile) to join the last eight Hollywood cars awaiting sale to National Metals & Steel for scrapping.

Thirty-eight years of dependable service had come to an end…