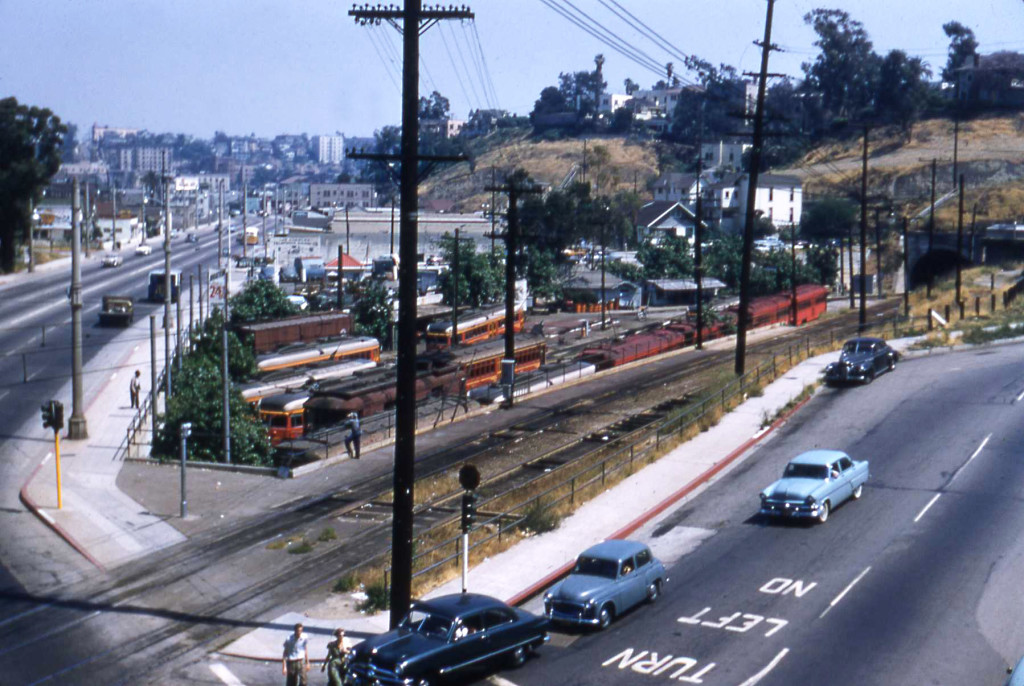 This beautiful photo of Pacific Electric’s Toluca Yard at the mouth of the Subway Terminal could have been taken anytime between June of 1952 and June 1955. But two important clues belie the fact that this photo was actually taken in June 1955, on the 12th to be exact.

Clue number one is the absence of numerous Hollywood cars that would be in use on the Hollywood Boulevard / Beverly Hills Line — about 40 cars, if this photo had been taken in the first half of 1954. By this time, all those cars were in dead storage at Torrance Shops and the West Hollywood Yard.

All is serene on this Sunday afternoon. A PCC sits on jack stands in the center of the yard, most likely undergoing some routine truck maintenance. Tower Car no. 00164 waits for a call if there is any trouble with the well-maintained PE overhead.

The most important clue as to the time frame of this photo is the 3-car train of Hollywood cars sitting on the storage track nearest the outbound main. All three cars are painted SOLID RED in preparation for their very last assignment as a New York City subway train. The three cars (one of which is no. 5161) have had all of their PE “Butterfly” graphics and PE emblem painted over. Only their numbers remained visible. They will be used in the big screen movie, “While The City Sleeps” starring Dana Andrews. A fight scene will take place in the Subway tunnel between Dana Andrews and the “killer” as subway trains pass them at high speed. The film was shot in the days AFTER the official abandonment of the Glendale – Burbank Line. The movie extras on board the cars were the VERY LAST passengers to ride through the PE Subway. In just seven days of this photo, it will be all over for EVERYTHING seen here.

It will take almost a year to clear out everything seen in the image. First thing on the agenda was to build a temporary loading ramp for the quick disposal of 13 of the 15 Hollywood cars that had been assigned to the line. They were loaded onto flatbed trucks and hauled away for scrap by November.

In February of 1956, the two remaining Hollywood cars (nos. 5166 and 5167) along with Tower Car 00164 and the old wooden boxcar loaded with precious Hollywood car parts were trucked over to the Southern District. The two well maintained cars, former fixtures of the Western District, were needed to bolster up the rag-tag remnants of the Watts lines’ low-numbered 5100s (nos. 5111 to 5125). The Watts Line Hollywood cars were suffering the ravages of the ZERO maintenance program imposed by the SOB management of Metropolitan Coach Lines…

After the 00164 and cars 5166 and 5167 were trucked away, the real destruction of Toluca Yard and the Glendale – Burbank line began in earnest. All the rails in Toluca Yard were lifted and most likely sold for scrap. Next, the rails were pulled up and PE’s beautiful catenary overhead was pulled down on the INBOUND side of the line only! The inbound track and catenary was removed from the SP Richardson crossing all the way to the Subway Terminal loading platforms. North of Richardson, EVERYTHING was scrapped. Toluca Substation and the outbound track along with the overhead remained somewhat serviceable.

PE management had initially hoped that a buyer could be quickly found for the beautiful well maintained PCCs. The idea was to keep the outbound track and overhead intact so the PCCs could be operated under their own power to the PE / SP interchange at Glendale Station. There, the PCCs would be loaded aboard railroad flat cars for shipment to the new buyer. The Shaker Heights Rapid Transit and the Newark Subway had shown some interest in the cars. But when the Twin Cities Rapid Transit suddenly abandoned their entire PCC-operated system (another dirty MCL / City of Glendale-type shady deal), three hundred 5- and 6-year old, near-new St. Louis Car Co. “all-electrics” came on the market at “give away prices” (even more dirty dealing) . Hopes for a quick sale of the 15 year old, air-electric PE Pullmans quickly evaporated. The Twin City PCCs were snapped up by Newark and Shaker Heights. What was left, were sold to Mexico City.

When those promising deals fell apart, what was left of the rails and overhead were removed with considerable disgust and anger. The beautiful PCCs were stuffed into the damp, dirty and unguarded Subway Tunnel at Toluca Yard and left to rot and be destroyed by sick vandals until a buyer could be found of what (if anything) was left of them!

And so this scene of functional beauty will in the the decades to come be turned into a graffiti-laden eyesore. Eventually, an up-cale apartment / condo complex will be built on the property. Toluca Substation and the Subway portal have been preserved for all time as a reminder of what dirty, backroom political dealings can do to a viable transit system here in LA and else ware in America.