5002: Perfection on the Eve of Destruction 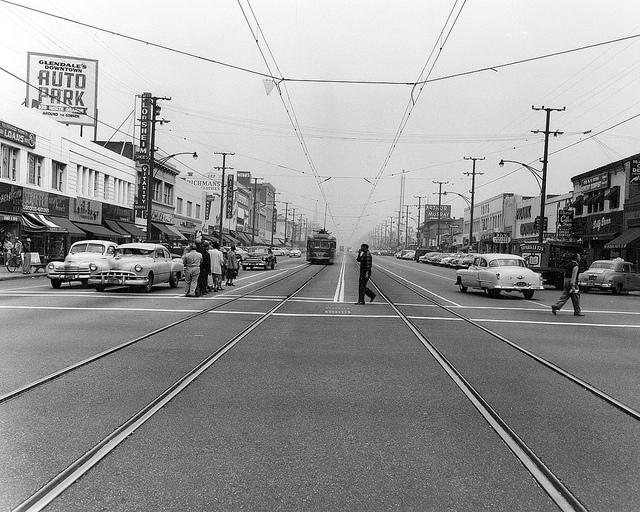 The ever dependable no. 5002 rolls down Brand Boulevard as it approaches waiting passengers on June 10, 1955.

In just nine days all this PERFECT street trackage, the beautiful SP style catenary will, for all practical purposes, be scrap metal. The PCCs and Hollywood cars operating along Brand Boulevard must have provided the smoothest riding experience of any rail line in the United States at the time. How anyone in their right mind could have allowed the conversion of this excellent rail line to bus operation is anyone guess.

When Jesse L. Haugh purchased the Pacific Electrics passenger service in October of 1953, the VERY FIRST thing he did was to announce his intentions to abandon ALL of the remaining former PE rail lines. The cities of Burbank and Glendale formed a united front to block any attempt on the part of MCL to convert the Burbank rail line to “stink buggy” operation. Then, without warning, the Mayor of Glendale, J. M. Lawson, stabbed the City of Burbank in the back, and dropped its opposition to the rail abandonment. HOW could something like this happen? The Burbank Line was in PERFECT condition. It was rebuilt from end to end, top to bottom in 1940.

The near-new PCCs had decades of service life remaining. The forever-young Hollywood cars were in virtually new condition. Had the line not been abandoned, it could have lasted well into the late 1980s in its 1955 condition. Today’s Red Line Subway passes within 50 feet of the PE Subway on Hill Street at 4th. The now building Downtown Rail Connector could have been incorporated into the Glendale Line.

It would have been a commuter’s utopia. All this wonderful excellent “might have been” commuter rail was flushed down the toilet by the “we don’t give a damn” mentality of the 1950s.

So now, transit experts, try as they might, must figure a way to put the Pacific Electric back together again at a cost of hundred of millions, if not, billions of our tax dollars.