Ex-Pacific Electric No. 754: Proud to be a South American 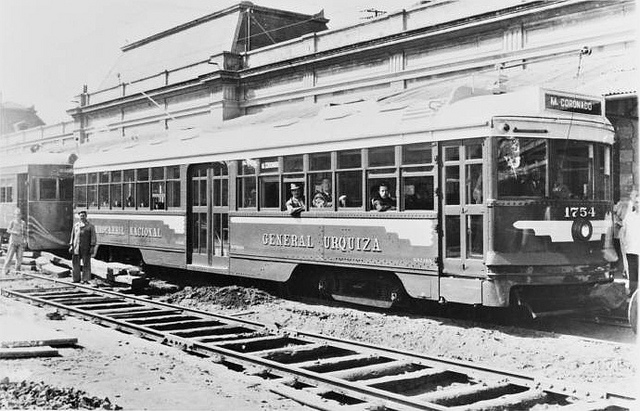 This beautiful photo of former Pacific Electric no. 754 was taken in late 1952.

The 754 was the first Hollywood car to go into service in Buenos Aires. The photo was taken just outside the Railroad shops for the inspection by company officials. The 754 is a sight to behold. She is as good, or better then new. “Splendid” would be another word to describe the 754.

What makes this photo so interesting as that some changes in the appearance of the 27 Hollywood cars has yet to take place. Except for a darker shade of red applied to the Hollywood cars in Buenos Aires, the cars looked like they just rolled out of Torrance Shops some 12 years earlier.

Most notable is that the 754, now renumbered 1754, still sports 2 trolley poles. Not to long after cars 732 to 759 went into service, changes began to alter the appearance of the cars. The first thing to go was one of the trolley poles. The GENERAL URQUIZA Railroad began a conversion to 3rd rail operation a year or two after the cars went into operation. The only trolley overhead wire to be found on the system was in yard areas, where 3rd rail operation was deemed too dangerous. One trolley pole was all that was needed after this conversion.

The next and most drastic change to the handsome appearance of the cars came when the General Urquiza Railroad cut train doors into both ends of the cars. On the Pacific Electric, trains of Hollywood cars was limited to just 3 cars. The PE felt that the “response time” of the air-operated brakes beyond the 3rd car would be too slow in LA City traffic to allow for safe operation.

Not so on the GENERAL URQUIZA. With train doors cut into both ends of the cars, ONE conductor could pass from one car to another, collecting fares with no problems. Trains of 5 and 6 cars became the norm and with no city traffic to worry about, the Hollywood cars did just fine. Who the HELL needs brakes in South America anyway??

As the decades passed, more second-hand railcars from the United States — most notably ex-Key System articulated bridge units — would intrude on the domain of the Hollywood cars. Newer rolling stock from other countries would also join the roster of the GENERAL URQUIZA.

By the late 1980s most if not all of the Hollywood cars were out of service and retired. The lone exception being the former 758 which became the Railroad’s line car.

The beautiful PE PCCs would last just 3 years in service on the GENERAL URQUIZA . The former PE 1100s would do somewhat better. As the decades passed, most of the 1100s were de-motorized and used in locomotive hauled trains until they too were retired. Reports are that one lone derelict 1100 remains as of this date. Except for the PCCs, the 700s and 1100s operated 35 to 50 years longer because they had been sold to the GENERAL URQUIAZ RAILROAD, regardless of the unholy modifications that were made to the cars.