Pacific Electric No. 717: A True Survivor 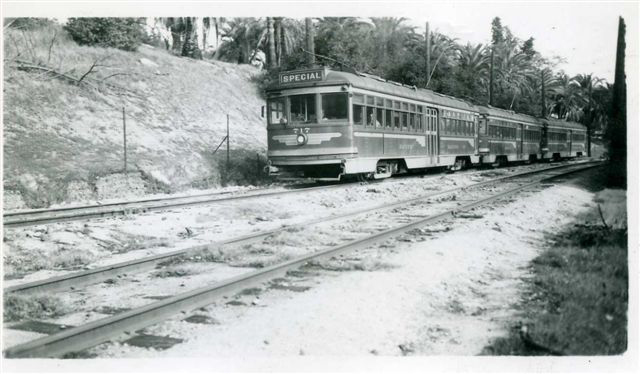 Pacific Electric Hollywood Car no. 717 heads up a 3-car train on New Years Day, 1949. The train is north bound on the Oak Knoll grade just below the Huntington Hotel and will soon deliver its full load of passengers to the Pasadena Rose Parade. The photographer of the scene probably did not know it at the time, but just 10 years later in 1959, the 717 (now renumbered LAMTA 1815) would be among the last operating Hollywoods on US soil.

Back on the home front, a handful of Hollywood cars survived: one of the former Portland cars at a Museum in Oregon (now at the Seashore Trolley Museum); one car saved by Richard Fellows, and four cars at Orange Empire Railway Museum.

As time passed, only the 717 would still operate under its own power, the other 3 Hollywood cars stored unserviceable, but otherwise complete. The car saved by Richard Fellows #655 would find its way to OERM, beautifully restored, but inoperable at this time.

So, as of 2014, the 717 lives on at OERM in operating condition, to the joy of hundreds of visitors that ride aboard her every year. She is the last of her kind — a true testament to one of the finest suburban streetcars ever built.