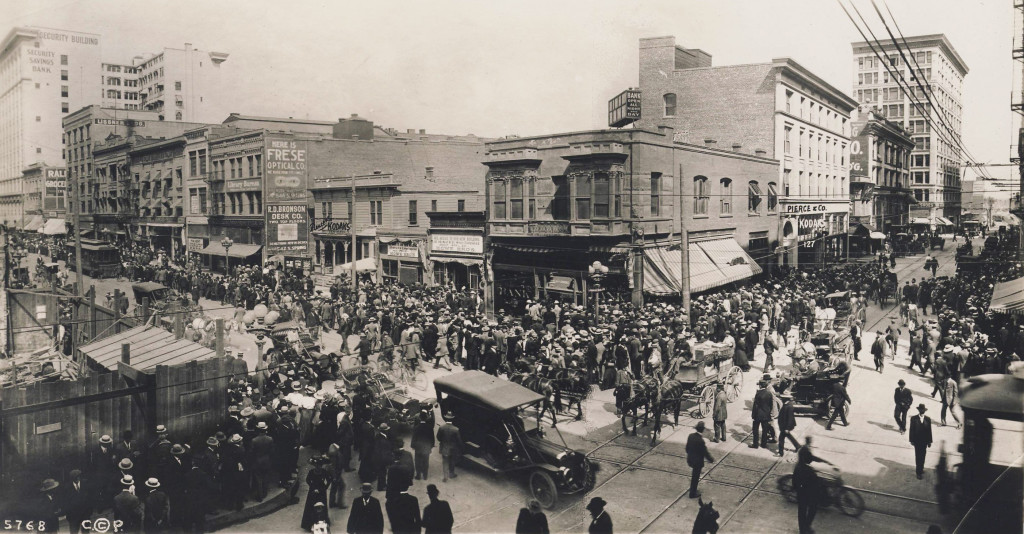 Caption on the back reads:

Corner of 5th and Spring Streets, April 1910. All Day and Night Bank [sic – it is “Night and Day Bank” based on the window lettering and signage]. President Skinner faced a run on the bank. Negative #5768.

By the looks of the crowd at the corner, it is apparent this photo is actually capturing all the depositors trying to get into the bank to get their money out. It also has apparently stopped traffic; in both directions the double street car track is blocked by pedestrians. The two store fronts to the left of the bank are occupied by Howe Brothers and the next store front is “Pierce Kodaks.” Further left is Frese Optical Company, 546 South Spring Street, R. D. Bronson Desk Company (top two floors) 542 South Spring Street, and further down the block to the left are ads for the Library Bureau, the Lissner Building, Ralphs Grocery Company, and Security Savings Bank in the Security Building. To the right of the bank is another store front with “Pierce & Co. Kodaks” and 127, possibly the street number.