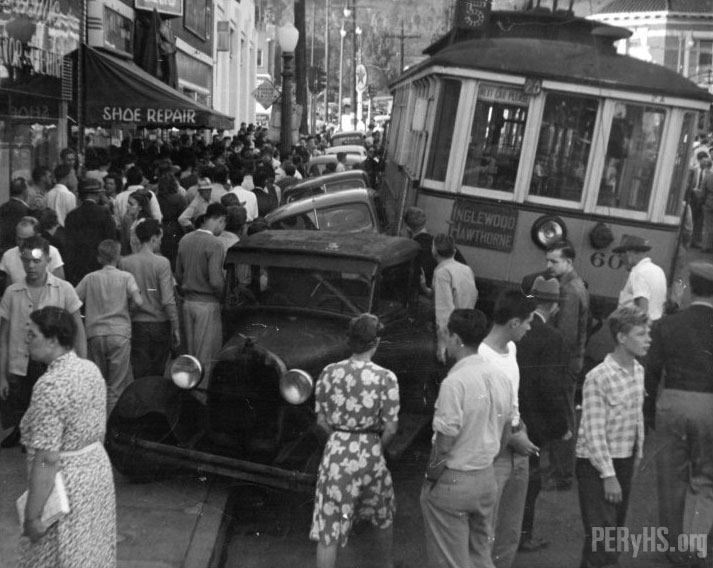 
Here is a collection of very rare photos from the Ralph Cantos Collection (photographer unknown) of a Los Angeles Transit Lines 5 Line street car accident (a 600-series car) on December 18, 1946. The motorman had left the car momentarily with a single passenger aboard; the car began to move and jumped the tracks, cutting grooves into the pavement and injuring the lone, unwilling passenger. 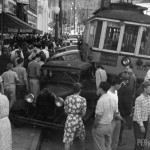 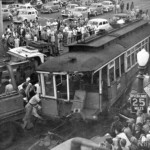 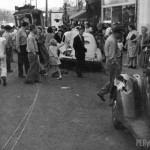 
From Alan Weeks’ remembrance of the event:

I was finishing up my paper route one late afternoon at the end of the W Line at North Figueroa St. and Buena Vista Terrace. After finishing the route I would go into the little market and buy a Pepsi or Coke. Then I would go out to the center safety zone and pull trolleys and change fenders for the Motormen on the cars. Then get in the car and flip the wooden seats.

I knew all the regular Operators by name. Many would let me ride all the way to Washington Blvd. and Rimpau Blvd. which was the West Terminal.

On this particular June day a W car pulled up and stopped. The Motorman said a 5 Line car derailed at Colorado Blvd. and Eagle Rock Blvd. I always wondered how he found out. No radios in those days. I hopped on my bicycle and took off for downtown Eagle Rock. I did not even stop at my house for my Dad’s old box camera.

This was a huge event. When I first viewed the accident it seemed surreal and unbelievable. The attached story gives you complete details. I stayed to the bitter end and watched them attach cables and pull the car back onto the tracks. LATL had two large Mack wrecking trucks on the spot.

For years after this accident you could see the groves in the street where the steel wheels made their own new tracks. Amazing no one was seriously hurt in this accident. As the runaway car rounded the curve it jumped the tracks and hit two or more cars in the intersection. Until this day I had never seen these excellent pictures – only the one in the newspaper article.