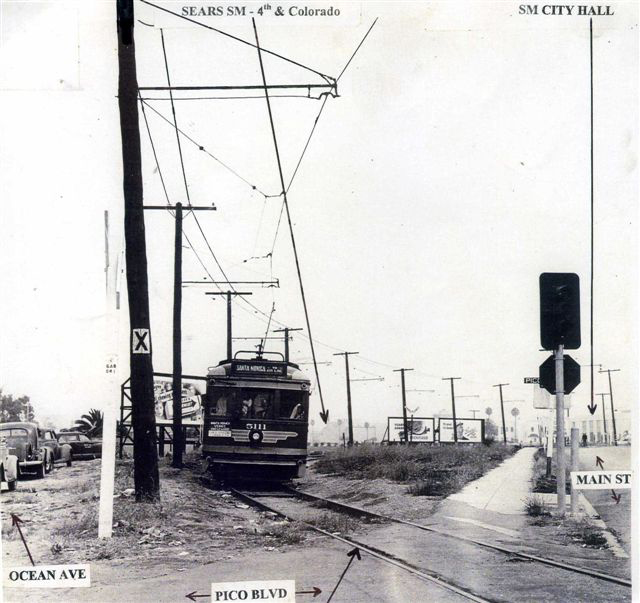 Pacific Electric car no. 5111 poses for the camera of the late Jeff Moreau on this overcast day at Pico Boulevard and Main Street in Santa Monica. It’s a Sunday afternoon and the time is running out for the historic Santa Monica Air Line.

The Air Line was not included in the sale of PE’s passenger service to “cut-throat” Metropolitan Coach Lines on October 3, 1953. This fan trip was operated on July 26, 1953. Passenger service to Santa Monica and Ocean Park / Venice officially ended on September 30, 1953. On that date, passenger service only operated between 6th & Main and 11th Ave until October 26th, when that truncated service ended, bringing an end to almost 60 years of uninterrupted rail service on the line.

The Venice Short Line had been abandoned 3 years earlier and the Air Line WAS THE LAST PE passenger service to the Westside of LA. By the end of 1953, the overhead wires were removed and this section of track abandoned.

In the years that followed, this entire area of Santa Monica would be transformed into the SM Civic Center Complex. The spot where the 5111 was photographed is now occupied by an upscale hotel. The 5111 would become LAMTA 1800 in 1958 and stagger on in deplorable condition, servicing the Watts Line until mercifully scrapped in 1960.

Today, the “New Santa Monica EXPO line” follows the original historic Air Line for much of the way to Santa Monica. The new terminal is located just across the street from the Sears Department Store at 4th & Colorado which can be seen in the distance of this photo.

I have said it many times before, and I will say it again when it comes to the PE…. “what goes around, come around.”