Pico and San Vicente Boulevards in 1927 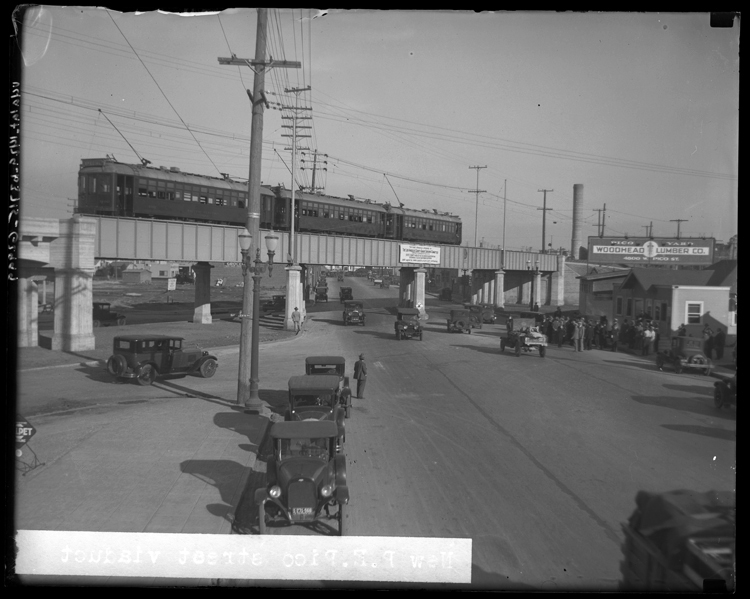 This old, faded photo taken in December 1927 is very unusual and historic. The camera looks in an easterly direction as a 3-car train of Pacific Electric 1100-class suburban cars crosses Pico Blvd. on the new San Vicente Viaduct along the VERY busy Santa Monica via Beverly Hills line.

The new viaduct replaced a very dangerous, at-grade crossing of the line with Pico Blvd. There is a banner hanging on the bridge over Pico, one can only guess that the banner was touting the safety aspects of the new span.

What really makes this photo unusual is that the 1100s were not nominally used on the Western District. For the most part, the 11s were fixtures of the Northern and Southern Districts. The 11s were still nearly new at the time, so PE may have thought it would be good promotional advertising to show off the new viaduct with some of their newer, all-steel cars, rather than the wooden 800 and 950s that would become fixtures of the SM via BH line. Modernized Hollywood cars would close out the last two years of the line. To be sure, the PE must have thought the 1100s would look good on the front pages of LA news papers, a real “PR” cue.

The importance of the great viaduct was short lived. After just 13 years as an important asset to the SM via BH line, through service to Santa Monica was abandoned in about December of 1941. Thereafter, the viaduct served as a back door entry to the West Hollywood Car House and maintenance complex, and for rush hour service on the W. 16th Street local service.

After 23 years of service, the rail service using the span was abandoned at the same time as the Venice Short Line in September of 1950. The viaduct would stand, unused, for another 14 years. Then in 1964 the mighty span that could have lasted more the 100 years was bulldozed away with none of the pomp and circumstance as its opening some 37 years before.