For the last 20 years of the Pacific Electric Santa Monica Air Line’s existence, about 50 or so loyal regular commuters enjoyed a variety of equipment. The 1930s saw the mighty 800-class of heavy interurbans providing most of the “service” on the line, that being one morning inbound and one afternoon/evening westbound trip. The 1940s saw a mix of 950s and 1000s holding down the runs. For the last three years, a single Hollywood car provided the service to the dwindling passenger loads.

In this side-by-side photograph, just about 63 years separate the views taken at almost the exact same location in Cheviot Hills. On the left, Hollywood car no. 5112 is seen making the afternoon westbound trip in the last weeks of September 1953. Some 63 years later, an LACMTA test train passes the same location, known today as the Cheviot Hill Trench, in the weeks before the line’s opening in May 2016.

Passenger loadings have surpassed expectations by a large margin. Currently two- and three-car trains provide 12 minute service for much of the day, seven days a week. The EXPO line is a winner by all accounts.

After the Air Line was abandoned in October 1953, the 5112 was transferred to the Southern District’s Watts Line. From that last run in 1953 to the last run on the Watts Line in November 1959, the 5112 (now renumbered 1801) would provide gallant service along the famous 4 tracks under the most deplorable maintenance conditions imaginable. Finally in 1960, the 5112 was rescued from the scrappers torch and now resides at OERM. 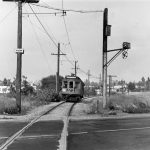 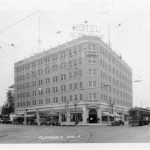