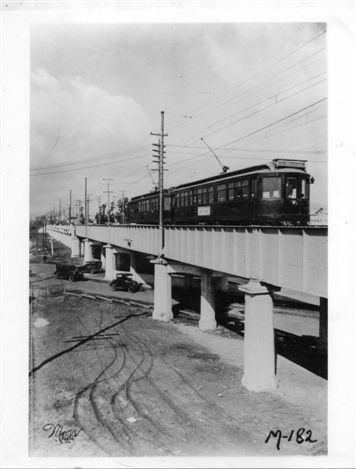 This beautiful photograph taken in November of 1927 shows a 2 car train of 950s with no. 955 on the head end. The occasion was the first test train over the newly completed viaduct over busy West Pico Blvd. Before the viaduct was built, the trains crossed Pico Blvd. at grade, resulting in numerous crossing accidents. Beneath the viaduct, much cleanup still remains. If you look closely at the left side of this photo, you can still see the cross buck and a portion of temporary track crossing Pico.

This is a very interesting photo in that it shows the two 950s in the middle of a 2 year upgrade and rebuilding program that started in late 1926 and ran through 1928. The 955 has had its former open section enclosed with deluxe brass sash windows, while the unidentified car behind the 955 still has its windowless open section. The installation of 2 PE pneumatic trolley bases has yet to be done on both cars.

The Pico / San Vicente viaduct was extremely well built structure. It should have lasted “forever.” But FOREVER would last a mere 37 years. The span was made useless after 23 years of service at the end of 1950 with the combined abandonments of the Venice Short Line and the San Vicente Shuttle. The span would remain standing, its rails and catenary long gone for another 14 years, providing a safe crossing over Pico Blvd. for a vast selection of 2, 4 ,and multiple legged creatures, until bulldozed into oblivion in 1964.

Today, no trace of the great viaduct remains. The only evidence that the PE was ever at this location, is the aliment of San Vicente Blvd.

In an ironic turn of events, the old PE right of way at this location still serves a public transit purpose as the new Rimpau Transit Terminal for both LAMTA and Santa Monica Blue Buses. Well…. as the old saying goes, “what goes around, eventfully comes around.”