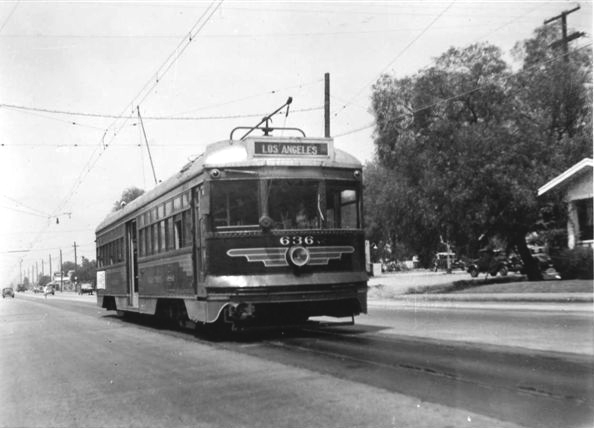 Pacific Electric’s Hollywood cars were true survivors with some of them in service 40 years stateside to 65 years in Buenos Aires. The cars were built in four orders over a six-year time span (1922, 1924, 1925, and 1928) but PE management considered them “all equal” in every respect.

The “Hollywoods” endured some of the most demanding service conditions that could be imposed on a transit vehicle. The cars were very well built, with the 160-car fleet remaining fully intact for most of 30 years. So highly regarded were the Hollywood cars by PE management, that two cars — nos. 608 and 616, which had suffered “catastrophic” damage that would have ended the career of lesser cars — were completely rebuilt to “better than new” condition after their respective calamities (616 a burned out shell, 608 a twisted hulk after a major collision). Both incidents occurred during 1943, and so desperate was the PE for passenger cars, that scrapping of the two cars was not an option.

In this photo, car no. 636, class of 1922, takes a little spot time at the end of the Burbank Line on December 5, 1940. At 18 years of age, the 636 was in prime condition, ready to join PE’s new PCCs on the Glendale/Burbank Line. The PE had put the Hollywood cars through a complete rebuilding and “modernization” program during 1939-40, along with other PE rail cars. The Hollywood cars could and did match PCCs at every performance level, except perhaps braking. But even so, Hollywood cars would and could knock you on your ass in both acceleration and braking.

By the time of this photo, I would doubt that few if any buses built in 1922 were still on the road, let alone still in transit service. In little more than one year, the 636 and its 159 sisters would be put to the test, carrying crush passenger loads all during World War II.

In 1949-50, with the demands of the war behind them, the Hollywood cars would again go through PE’s Torrance Shops for an modest safety upgrade and repainting program to bring the cars up to “one-man/two-man” operational standards. The 636 was renumbered to 5113. By this time, the financial condition of the Pacific Electric’s passenger service was dire at best, and this would be the last time the trusty Hollywood cars would ever see any type of preventative maintenance. The “Hollywoods” were now on their own to face ten years of “we don’t give a damn” NO MAINTENANCE service conditions. Lesser-built cars would have succumbed much sooner, but at least 15 Hollywood’s would endure under the worst conditions that could be inflicted on an “in-service” transit vehicle.

From 1950 to 1953, massive rail abandonments made many Hollywood cars surplus; they were stored at several locations on the system. The last months of 1952 saw 28 of the BEST Hollywood cars head for Buenos Aires, and 1953 would see the first scrapping of these remarkable cars. Eight Hollywood cars made their escape to Portland, Oregon, where their service life was a brief 5 years because of a management change that favored buses over rail transit. Seven of the eight Portland cars were gone by 1958.

PE’s passenger service had been sold to bus-minded Metropolitan Coach Lines in the late months of 1953. MCL leased all needed rail cars from the PE, turning themn back to the PE when MCL “WAS DONE WITH THEM.” The PE forced MCL to purchase the last 15 operational Hollywood cars needed for the Watts Line service, and about 60 Blimps in 1957.

Five years of RTF (run til failure) no-maintenance was taking its toll on the “surviving” cars now operating in slave-like conditions. In the early months of 1958, the first LAMTA took control of all transit operations in LA. The first thing the LAMTA did was to renumber all rail cars except the LATL PCCs. ALL rail cars numbered below the 2000 number series were DOOMED. The 5113 became LAMTA 1802. The Blimps were renumbered into the 1500 and 1700 numbers and the LATL H-3s went to scrap with their “factory” 1400 numbers in early 1959. (The LATL H-3s were in MINT CONDITION at the time of their scrapping.)

The condition of the last remaining Hollywood cars under LAMTA control became “desperate.” More than ten years had passed since the last major maintenance was performed on the Watts Line Hollywood cars. NO modern diesel bus of 1950 vintage could remain operational nor operate under these harsh, no-maintenance conditions, but the last Hollywood cars continued to operate under “slave labor” conditions. Finally and perhaps mercifully. the LAMTA abandoned the WATTS line in November 1959, ending almost 40 years of continued service of the 636. The 636 had enjoyed 30 years of pampered care under PE ownership, BUT the last ten years of 636’s life can only be described as pure HELL. The 636 had provided 40 years of reliable service, a testament to her fine construction and PE maintenance.

As an additional note, the East St. Louis & Suburban Railway took note of the Hollywood cars and ordered four near-duplicate cars from the St. Louis Car Co in 1924. The four cars were sold to the Illinois Terminal Railroad in 1935 and continued in service until 1959. The Illinois Terminal 470s looked like a PE Hollywood car on steroids — basically the same car, on much larger trucks. 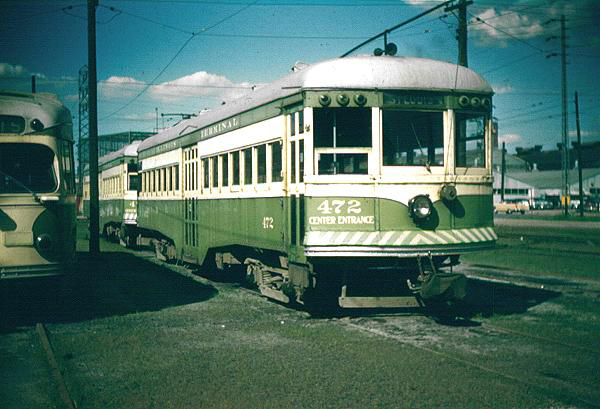 The East St. Louis & Suburban Railroad tacked on a 4-car order to PE’s 50-car order of cars 650-699. These cars were built from the Hollywood car plans, but sat on much bigger trucks and were considered “interurbans” as opposed to the Hollywoods which were “suburban” cars. 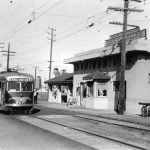