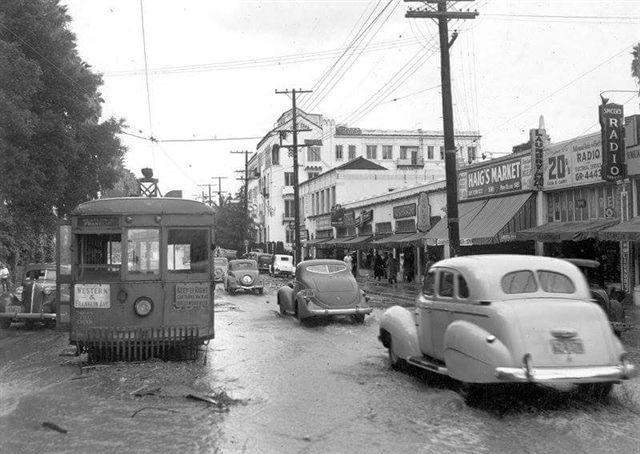 Heavy rains in 1938 caused havoc all over Los Angeles and Southern California.

Here, Pacific Electric Birney no. 335 sits in traction motor-high rain water on Franklin Avenue in Hollywood. The door is open, the trolley pole is pulled down and the motorman is nowhere to be seen. The high rain water was just to much for the little car. The 335 was working the WESTERN – FRANKLIN Line, known to PE crews as “The merry go round.”

Time was running out for PE’s fleet of Birney cars by this time. The 335 is listed as being sold for scrap in 1939, so this may have been the “end of the line” for the hapless little fellow.

Sadly, most of the little cars were scrapped. Thankfully, both the 331 and 332 are alive and well at OERM, more than 90 years after they were built. Sadly, 337 was cut down the middle length-wise for interior shots and later “disposed with.”