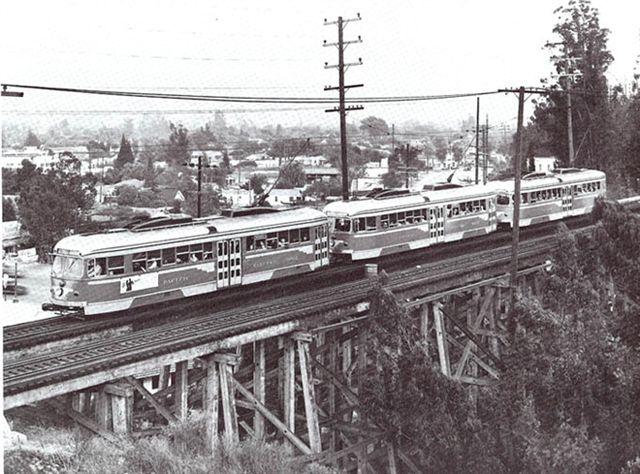 Pacific Electric’s 30 first ever, double-end, coupler-equipped, multiple-unit, and in my opinion, the MOST BEAUTIFUL PCCs EVER, were built by Pullman Standard, their largest order up to that time. The 600 or so PCCs built up to that time varied in length, width, seating, door arrangements, and electrical equipment. But in general, all 600 of those first PCCs were identical.

PE’s 30 double-enders literally stopped the PCC show. PE was thrust into the national public transportation spotlight. The cars broke with all existing established PCC tradition. Except for the 5 Market Street Railway hybrid PCC lookalikes, known as the “Magic Carpet Cars” or “One Arm Bandits”, virtually all PCCs were single enders.

Not only were the PE’s PCCs long and wide, they were able to operate in trains of up to 3 cars. This photo taken in early 1941 shows the “Pride Of The PE” in all their glory.

The General Electric Company — always the champion of electrically powered public transit vehicles — was eager to showcase the PCC. GE produced at least three lavish films featuring the latest types of electric transit, including the Trolley Coach. The first of these films produced in early 1937 (in black & white) was titled “Modern Electric Transit”. This film put a heavy emphasis on new trolley coach installations across America. Also featured were the new PCCs delivered to the Brooklyn and Queens Transit, Union Pacific’s M10000, ocean liners Queen Mary and Normandy. Even the Hindenburg was shown as the “Luxury liner of the Skies.”

The second film, “Life Stream Of The City” (in color, above) was produced around 1946-47 and showcased various rail operations both rapid transit and PCCs (surface cars) and trolley buses. PE’s PCCs were shown in a positive spotlight.

The last of these GE films to feature PCCs was tilled “GOING PLACES” and was produced about 1952-53. It once again showcased PE’s PCCs as well as LATL’s near new P-3s at Rimpau Loop. Most of this film was made on the Shaker Heights Rapid Transit featuring new Pullman Standard MU PCCs.

Unfortunately, by the mid-1950s, General Motors had begun an unstoppable campaign in print and film media to sell America on buses, Chevys and Buicks. One film “Lets Go To Town” (above) showcased GM’s latest buses “with their smart new interiors.”

Not content to sell America on buses, GM produced still another film titled “Give Yourself The Green Light” (above). This film encouraged the construction of interstate highways across America. This particular film hit below the belt in showing the Pacific Electric’s abandoned and destroyed right-of-way at the Barham Boulevard bridge in the Cahuenga Pass, stating the placement of rail line tracks in the center of “Expressways” was a waste of taxpayers’ money. The space occupied by rapid transit tracks would be better used for motor vehicle traffic lanes.

GE produced at least one more transit related film titled “Rapid Transit – 1964”. This film showed no PCCs, but rather showcased new rapid transit operations in Chicago and Toronto. From then on, GE concentrated on jet engines and diesel locomotives.

General Motors had won the battle and the war. Too bad for everyone.