Pacific Electric Tracks in the Hollywood Freeway: A Missed Opportunity

The postcard images depicted here show the Cahuenga Pass over a 45-year span. 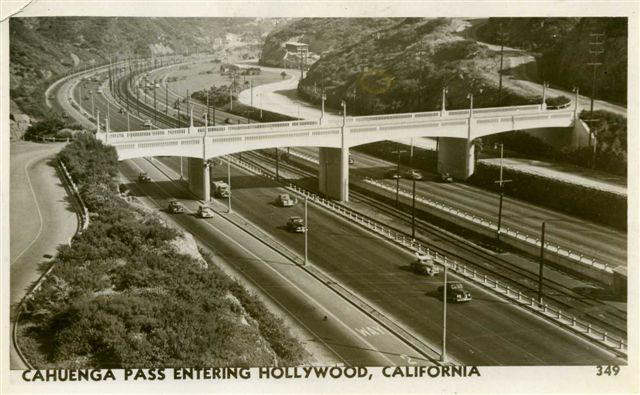 The image above shows the Pacific Electric’s car tracks in the center of the then-called “Hollywood – Cahuenga Park Way”. This section of “Park-way” officially opened for traffic (both rail and automotive) on June 15, 1940, just a few months after the grand opening of the Arroyo Seco Parkway (now the 110 Freeway to Pasadena). This section of the Park-Way was given national media attention as the “Way of the Future” — that is, integrating rail rapid transit into new highway construction. Indeed, even the General Electric Company staged a filmed meet using two 2-car trains of PE PCCs rolling through the Pass. The short segment was used in a GE promotional film “Lifestream of The City,” which is embedded below. It was a proud time for both the PE and GE.

Advance to 9:45 to see the Cahuenga Pass PCC meet as described by the author 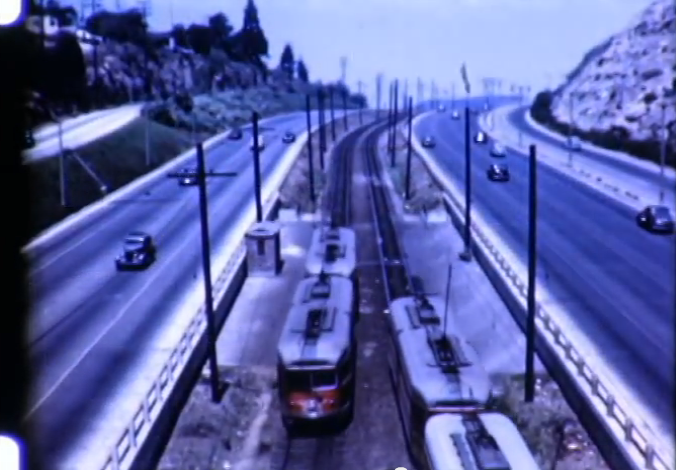 In 1940, the PE was still very much a “rail-oriented” company. PE management lobbied city, state and highway officials to consider integrating the PE rails into the ever-expanding Hollywood Freeway as it was extended towards Downtown LA. It was hoped the the PE rails would be included into new freeway construction. PE offered plans whereby the PE rails would be incorporated into the center of the new freeway. The rails would leave the freeway at Glendale Boulevard via an underpass and head directly to the Subway Terminal. It would have been fantastic convince for LA commuters.

But always, it was not to be. There was no way in hell that the powers then in charge of highway and freeway planning and construction would include a privately owned corporate rail line down the center of a freeway paid for by taxpayer dollars. It did not matter that the PE paid hundreds of thousands of tax dollars annually just to operate their system. The only reason that PE rails were placed down the center of the Cahuenga Pass was the fact that the PE rails was there long before anyone thought of the Park-Way. Let’s hope that the PE did not have to cough up any money for the relocation of their rails.

After World War II, most big US cities began to look at rail transit (city-suburban and interurban) as nothing more than an albatross, impeding highway construction. Private automobiles traveling on multi-lane highways through the urban landscape was the way of the future. City governments across this nation promised an “Automotive Utopia” for all Americans to enjoy.

And now, more than a half-century later, most US “Automotive Utopias” have turned into “Automotive Quagmires” … Hell on wheels. And now as America moves into the 21st Century, rail rapid transit has suddenly become the “in thing”, too late for the PE, but better late than never….

After little more than 12 years in service, the rail service through the Pass was abandoned. This 1955 photo shows the abandoned PE right-of-way. The waiting shelter in the center of the freeway was reached via a pedestrian subway from Caheunga Blvd west. It was sealed up after abandonment. It is possible that it still remains intact today, though plugged at both ends. 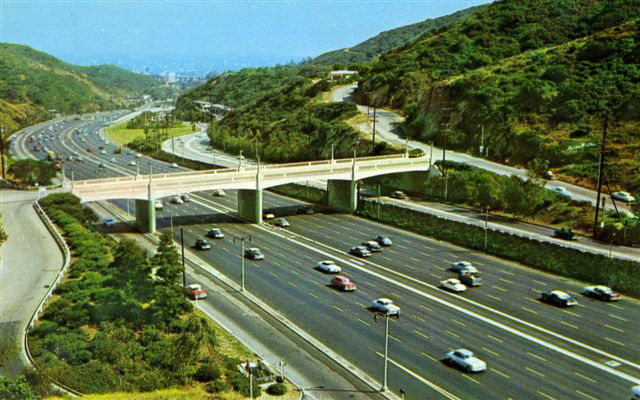 PE’s right-of-way as after erasure…gone and for the most part, forgotten.