Pacific Electric Tracks In The Cahuenga Pass: Some Final Thoughts 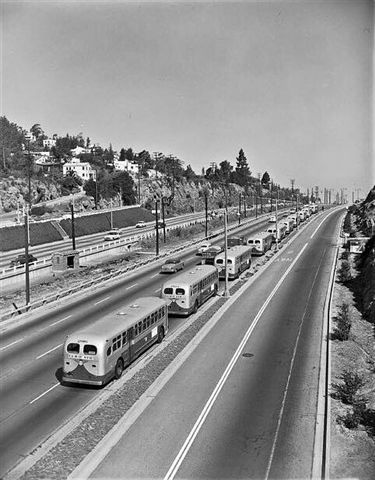 This publicity photograph taken on the north bound lanes of the Cahuenga Pass was staged for all to behold. Pacific Electric proclaimed that a new era in transportation had arrived in Los Angeles. Modern flexible motor buses could now be routed to meet the needs of the ever-changing San Fernando Valley.

I am sure that all the media text that accompanied the several photos, where produced by the Minister of Propaganda for General Motors. The propaganda department of GM had produced several films to be shown to civic leaders all over the USA. The most notorious of these films was titled “LET’S GO TO TOWN” (mid-1955). The film listed city after city across America that are “Going The Motor Coach Way.” The film showed PCCs in such cities as Detroit and Philadelphia as a slow, outmoded form of city transit. The film went on to say that streetcars (PCCs) operating on fixed guideways on narrow streets were as inefficient and outdated as the horse and buggy. The GM film also went on to say that bus routes could be changed at will, to meet the ever-changing needs of the City.

But in the decades that have passed since PE staged the “Modern Motor Coach Caravan” has proven beyond dispute, is that in general, the traveling public prefers rail transit over buses. To be sure, any transit system needs buses in their fleet as part of a balanced system. Buses have their place in such a balanced system. But, according to General Motors, all the needs of ANY major American City could be handled by fleets of buses.

Not mentioned in GM’s propaganda film is that what business man is going to invest assets built around a bus stop pole, that can be removed or relocated at the discretion of a City or Transit official. The film goes on to say, that major transit systems could sell off all out dated rail infrastructure. Not mentioned in the film is where are the buses to be stored and maintained. But sadly at this time in history, America ate up all the crap that GM could dish out and large scrap metal companies, Mexico City and Toronto would become the beneficiaries of this terrible waste.