Pacific Electric PCCs 5009 and 5017: Ready For The Final Curtain Call 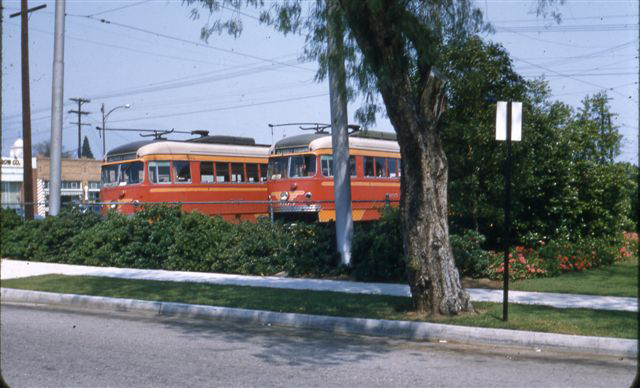 This beautiful photo taken on the morning of June 18, 1955 shows Pacific Electric PCCs nos. 5009 and 5017 laying over at Burbank Yard. On a “normal” weekend, at least 8 to 10 PCCs would be stored at Burbank Yard waiting for the Monday morning rush hour on the very busy Glendale- Burbank Line.

BUT, that’s not going to happen on Monday morning, June 20th, 1955. The management of Metropolitan Coach Lines has pulled off the “unthinkable:” 48 new General Motors passenger buses will begin service on a longer, meandering route form Burbank to the congested streets of Downtown Los Angeles, replacing the the PCCs and Hollywood cars used on the line.

The PCCs had a seating capacity of 59 passengers, and the Hollywood cars 63 passengers each. In multiple-unit operation, the trains could move passengers by the hundreds in a single operational unit.

And yet, MCL management did not give a damn about providing fast, efficient service to several thousand commuters that used the line daily. MCL purchased the passenger operations of the PE for one reason, and ONE reason only… to rape the commuters of LA for the sake of financial profit.

In the case of the Burbank, MCL gave away key portions of right-of-way for the monumental sum of one dollar.

Later on this 18th day of June, 1955, the 5009, 5017, and the other PCCs stored at Burbank will make their final non-revenue run back to the Subway Terminal and a uncertain future. The Glendale-Burbank Line is in preparation for abandonment. MCL management used every underhanded tactic to “pull off the unthinkable” .. the destruction of a fast, modern rail service in favor of a slow, meandering bus line on congested city streets in the “name of progress.”

All the while city officials of LA, Burbank, and Glendale looked the other way … what a disgraceful, shameful bunch of bull! 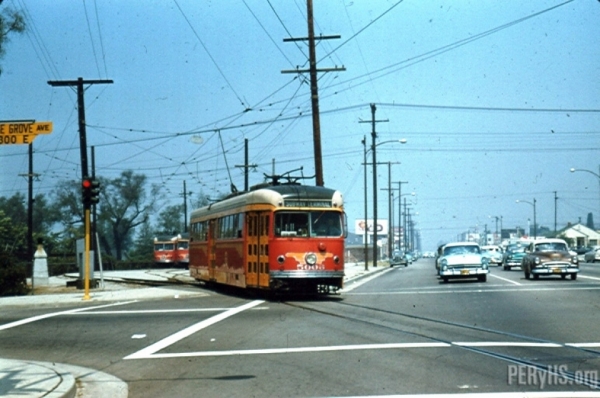 I am so happy that folks are still interested in the PE. The cars entered and left the yard at Orange Grove Ave after the yard was rebuilt in 1949. Before 1949, the cars BACKED into the yard from PALM Ave. one block to the north. After abandonment, I believe a car wash was built on the property and was there for severl years. Then that was torn down and a Burbank Police sub-station built there. I am not sure what is there today, but one thing for sure, the nice park next to the yard is gone, along with the beautiful PCCs.. Ralph