Pacific Electric No. 5023: Buenos Aires-bound, for better or worse 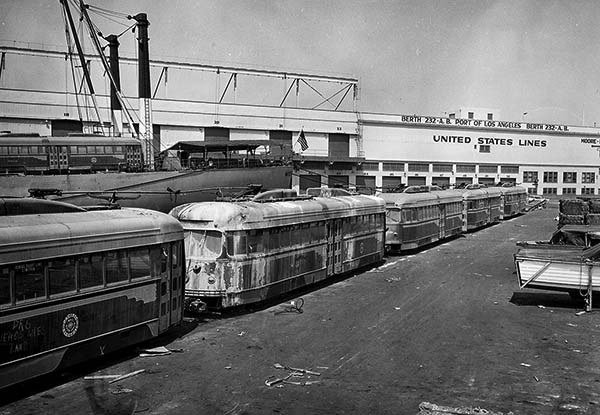 Pacific Electric PCC no. 5023 shows the the terrible effects of 4 years storage in the dank confines of PE’s Subway Terminal tunnel. Some of the cars looked somewhat better, but the 5023 really got hammered with the lime drippings from the roof of the tunnel.

This was a shameful chapter in LA’s transit history. About a year before, when the PE sold its passenger operations to Metropolitan Coach Lines in October of 1953, all 30 PCCs went through Torrance Shop for a complete cosmetic overhaul. When the PCCs rolled out the doors of Torrance Shops, they were in top condition. Included in the overhaul were a 4 new doors, new interior and exterior paint and new seat covers where needed. All 30 cars were now in better than new condition.

For all practical purposes, they were ready for another 15 to 20 years of service here in LA. It was not to be.

Metropolitan Coach Lines management informed the populace of Los Angeles that ALL 7 remaining rail lines would be converted to “gutter liner” replacement bus service as soon as possible. The new paint on the PCCs had barely cured when they were stuffed into the Subway Tunnel after the June 1955 abandonment of the Glendale / Burbank Line. And there these fine cars would rot with the resulting effects displayed by the 5023.

All 30 cars were pulled out of the Subway Tunnel in September of 1959 and trucked to the LA Harbor. The cars were loaded aboard freighters and sent to South America.

Once the PCCs arrived in Buenos Aires they were extensively modified. The PCCs were used exclusively on a short suburban line for about 3 years and when that line was abandoned, the 30 PCCs, the most beautiful PCCs the world would ever see, vanished with out a trace. As of this date, NO ONE living or dead, seems to know just what became of them.

A traction mystery if ever there was one. 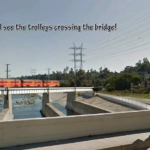