Pacific Electric No. 5015: Out of the Hole and Unscathed 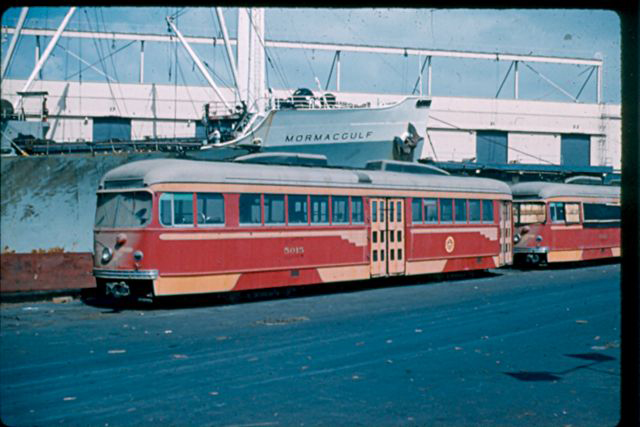 June 19, 1955, will live in infamy among Los Angeles rail fans and commuters.

On that day, the most dastardly deed ever perpetrated on Los Angeles commuters was enacted by Metropolitan Coach Lines management. MCL management single-handedly scuttled the Glendale-Burbank Line and in so doing, set the rapid transit movement in Los Angeles back into the “stone age.”

The Glendale-Burbank Line was the “poster child” for modern rapid rail transit. The lines’ infrastructure was in PERFECT condition, employing ultra-modern PCC rail cars, operating on several miles of grade-separated right-of-way, all of which had been completely rebuilt in 1940.

The line entered and exited downtown Los Angeles via a mile-long subway, saving commuters valuable minutes, compared to buses and autos mired in traffic on Downtown streets. All this magnificent infrastructure was scuttled by a management that did not give a damn about the traveling public they were supposed to serve.

The PCCs used on the line were leased by MCL from the PE. After abandonment, the PCCs were turned back to the PE and placed into storage in the dank confines of the Subway Tunnel. A security guard watched over the 30 PCCs for just over a year. The PE had hoped for a quick sale of the cars, all of which were in good to excellent condition, having been completely refurbished in late 1952. With hope of a fast sale fading with every passing month, the security was dismissed and a gate of marginal quality hastily erected across the Subway portal.

It did not take long before sick, demented vandals gained entry into the Subway Tunnel and proceeded to destroy many of the unguarded PCCs. The first few cars nearest the portal were nearly completely destroyed. But the cars that were further back in pitch black darkness escaped major damage.

This photo taken by Ray Ballash in August of 1959 is from the James R. Baker collection. The 5015 sits at the LA Harbor awaiting its turn to be loaded aboard a freighter that will take it away to far-off Buenos Aires, and a new life.

What makes the 5015 so special is that it is in perfect condition, untouched by the sick, demented bastards who had nearly destroyed many of the 5015’s sister cars. It’s just a damn shame that THIS car could have been saved by LA rail fans and preserved at the Orange Empire Trolley Museum where generations of traction fans could have enjoyed seeing and riding the 5015.

But alas, it was not to be. The PCCs were sold for $2500 each, a rather large amount of money for teenage rail fans of the time that had already saved several LATL streetcars selling for around $200.00 each in scrap value. The price of $2500 was far beyond the reach of LA’s young dedicated rail fans.