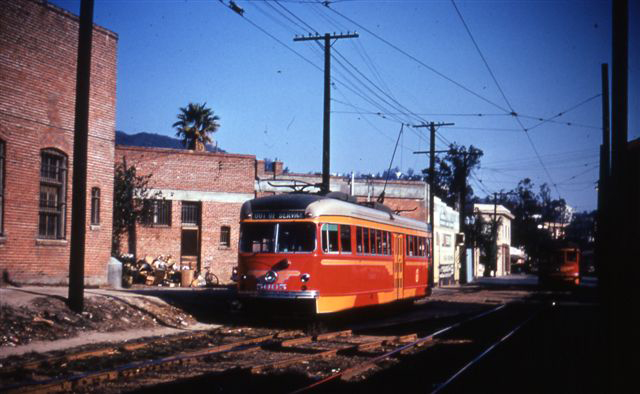 On April 14, 1912, just after the RMS Titanic struck an iceberg, Captain Smith was informed by the Titanic’s builder Thomas Andrews that the Titanic was doomed and was going to sink.

In October of 1953, when Jessie L. Hough purchased the passenger operations of the once-great Pacific Electric, he informed everyone involved with the PE’s rail operations that all remaining rail lines (2 in the Western District, 5 in the Southern District) were “DOOMED.”

And like the Titanic’s brave chief engineer, whose men worked selflessly down below decks to keep the steam up, so electric lights and water pumps worked as long as possible, keeping Titanic afloat long enough to give some passengers more time — the PE crews of the Western District continued to provide top-notch service, despite their looming terminations.

And so it was during the last weeks of August 1954 that the dedicated and hard-working “Toluca Yard Shop Force” would do everything possible to keep the Glendale-Burbank Line alive and fully operational, knowing full well that the line was doomed.

The September 26, 1954, abandonment of the Hollywood Boulevard Line meant that West Hollywood Shops would be unreachable by electrified rail cars of the Glendale-Burbank Line. All maintenance for the remaining 30 PCC and 15 Hollywood cars would be performed under primitive conditions in Toluca Yard.

This photo by the late, great Ira L. Swett was taken at Gardner Junction just a few weeks before the Hollywood Boulevard Line abandonment. It was now time for any and ALL usable parts at West Hollywood to be gathered up and moved to Toluca Yard.

And like the Titanic, the Glendale-Burbank line, PE’s most modern and technically advanced rail line, was doomed. Toluca Yard’s shop men would keep the cars and infrastructure in good working order until the very end, just 9 months later.

In this photo, the 5005 is deadheading to West Hollywood Shops to load up everything usable, and then return to Toluca Yard. According to Ira, several of these “box-motor” trips were made with various PCCs loaded with valuable parts to prolong the inevitable.

The Glendale-Burbank line went down with trolley poles held high. All 45 cars, track, overhead and signals were in perfect working order to the very end. 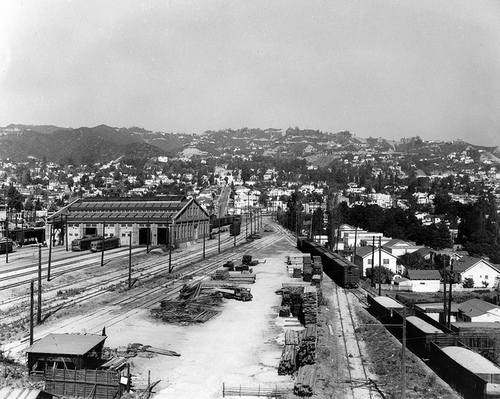 PE’s vast West Hollywood Shops in about 1946. A Hollywood car and PCC can be seen in front of doors #2 and #3. The shops did “running repairs” for Western District cars for decades. With the September 1954 abandonment of the Hollywood Bouleard Line , the shops were no longer accessible by Glendale -Burbank Line cars. By the end of 1954, the Glendale-Burbank Line was an “electrified island” in a sea of asphalt, under siege by a pro bus / anti-rail MCL management. Ralph Cantos Collection. 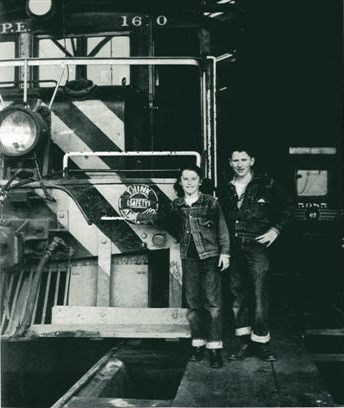 Rail fan and book publisher Jeff Moreau and his sister Stefanie pose for the camera in 1951 at West Hollywood Shop along with juice jack 1620 and Hollywood car 5085. Stefanie would go on to fame as actress Stefanie Powers. This photo is from the book “Growing Up With Trains” from long gone Interurban Press. Photo from the Jeff Moreau collection. 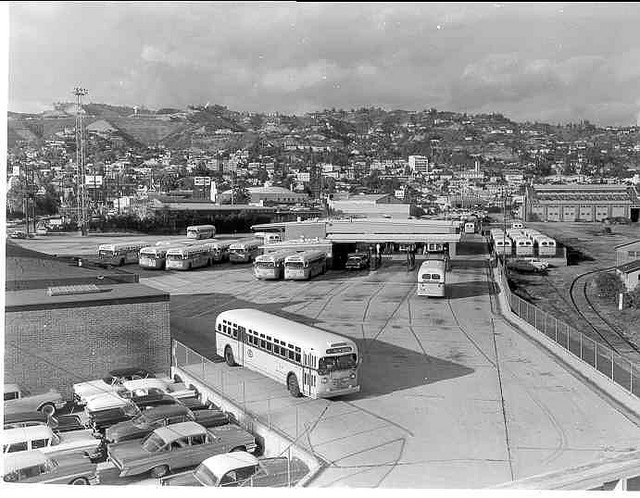 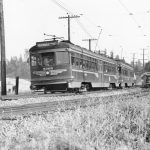