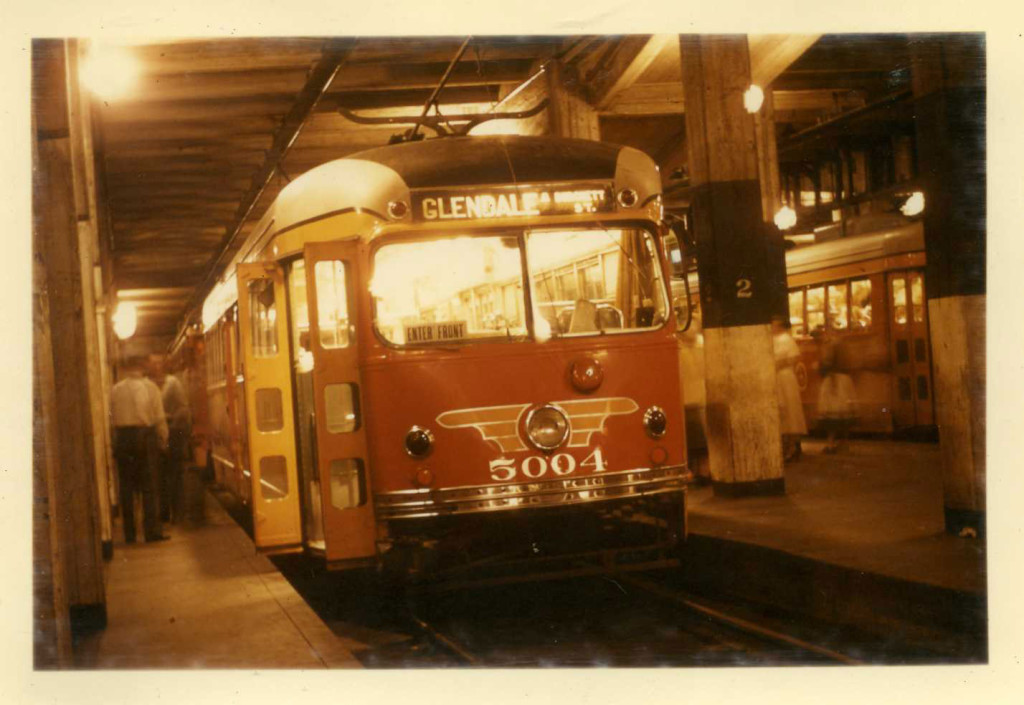 Like the mighty ocean liner “Titanic,” the once great Pacific Electric Railway struck and iceberg in the form of the Highway Department, a City that didn’t give a damn, and Jessie Haugh.

The PE was taking on water and was sinking fast. Like the brave men that worked below the brightly lite decks of the Titanic trying their best to keep the ship afloat, so did the shop forces of what remained of PE’s rail infrastructure.

PE’s Southern and Western District maintenance personnel gallantly kept the the deteriorating fleet of Blimps, Hollywood, and PCC cars operating under the most primitive conditions. Torrance Shops were gone, and what little maintenance the West Hollywood car shop provided, was also gone by the end of 1954.

As 1955 dawned on the Western District, all “maintenance” on the 15 Hollywood cars and the 30 PCCs was being performed by dedicated shop men with tools that were barely sufficient to keep a 1941 Chevrolet running.

In this photo taken on Friday afternoon, June 17, 1955, Pacific Electric PCC no. 5004 prepares to make a run to Burbank. Maintenance personnel have managed to keep the PCCs and Hollywood cars in respectful condition, given what little they had to work with. The 5004 still shines as it awaits departure time for this last rush hour. Another PCC sits on track 2, its interior lights aglow.

The Subway Terminal shop men gave it all they had, they kept Glendale / Burbank afloat for as long as they could. When the Glendale / Burbank line sank, it took the beautiful Hollywood cars with it. The PCCs waited four years to be rescued, but were saved to run another day in Buenos Aires.