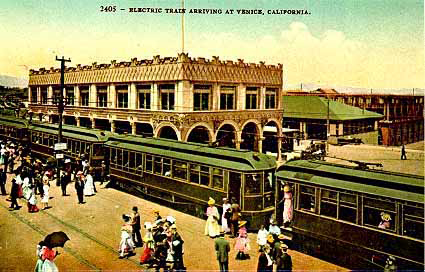 Wonderful Venice Beach station, about 1911, is seen here as a 4 car train of LAP / PE 700s bound for Santa Monica discharges passengers. The train will enter the “Trolley Way” at this point as it heads north to Santa Monica.

Today, the only thing in this post card photo that is recognizable is the beautiful building with its elegant arches. After abandonment in 1950, the “Trolley Way” at this point would become an extension of Pacific Ave. and then become Neilson Way through Ocean Park. PE would later renumber the 700s into the 950 class with the arrival Hollywood cars which became the new 700 class cars. The Venice Short Line was always a money maker for the PE, but by 1948 with its infrastructure nearing 50 years of age, and plans for the Santa Monica Freeway finalized, PE took the easy way out and abandoned the rail service in favor of buses. If the Venice Short Line could have just held out for “a few more years” say to about the year 2000, I think retaining and rebuilding the rail service would have been a better choice. But as the late Paul Harvey would often say, “the view through the rear view mirror, always seems to be clearer, then that through the front windshield.” In the case of the VSL, he got that right!!