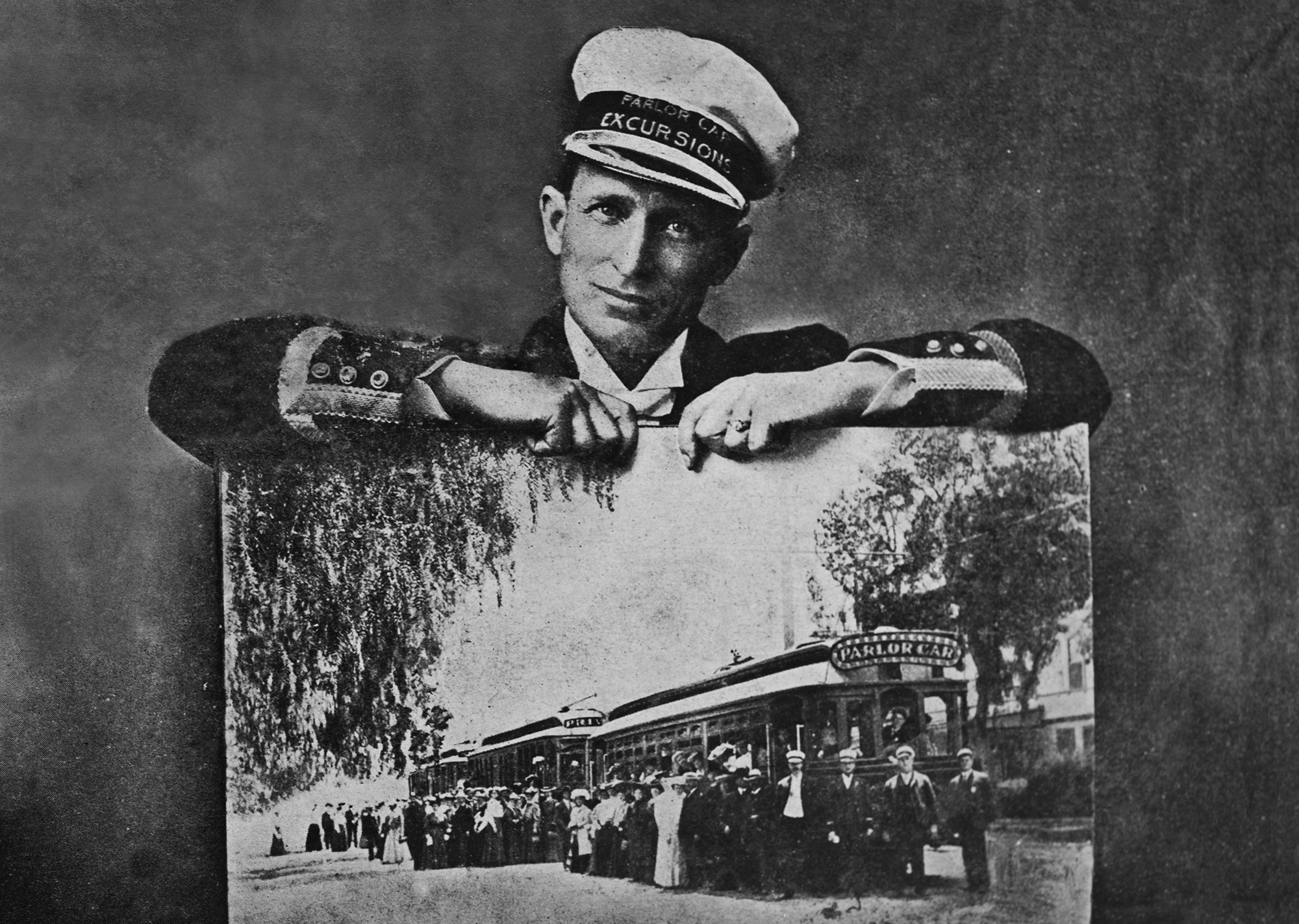 A classic image of Charles Merritt (C. M.) Pierce, famed operator of the Los Angeles Pacific Balloon Route Excursion. This image comes from a broadside donated by Bobby McDearmon to the Mount Lowe Preservation Society (parent of Pacific Electric Railway Historical Society). The broadside is undergoing conservation now and will be available for research and viewing shortly.

From The Electric Railway Historical Association:

The Balloon Route Trolley Trip was the most famous trolley trip in the west. In its day, few tourists to Los Angeles missed riding the Balloon Route cars, chiefly because of the strenuous efforts of the man who, more than any other, was responsible for the remarkable run of public favor this trolley trip enjoyed. That man is Mr. Charles Merritt (C.M.) Pierce, in his ninetieth year as this is being written (November, 1955) and still very active and in excellent health. The editor recently had the privilege of interviewing Mr. Pierce at his home in the San Fernando Valley where this nonagenarian owns and operates his own business, the constructing and distributing of health incline boards to large department stores of the nation. Mr. Pierce attributes his excellent health in large part to his exercise boards.

Much of the color of the Balloon Route Trolley Trip is to be found in the various advertising circulars ot the trip, but Mr. Pierce himself is the best authority for the history of this Southern California institution. Suppose we let him tell this fascinating story in his own words: 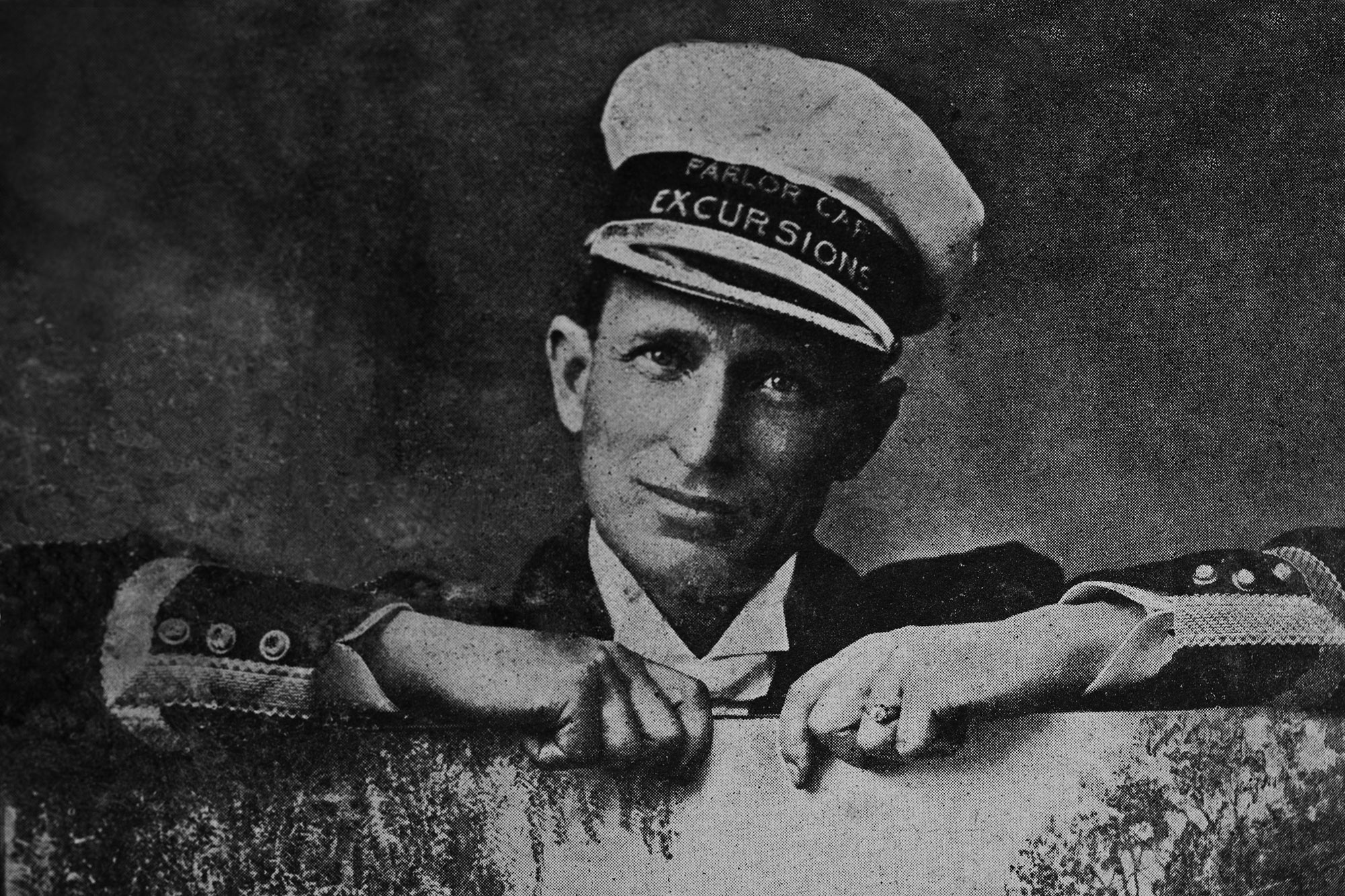 “I first came to Hollywood in October 1900, and opened the Glen-Holly Hotel at the corner of Yucca & Ivar Streets. It was Hollywood’s first hotel. We operated a tallyho which met tourists at the car line and took them on a guided tour of the area, then to the hotel for lunch and back to the car. I noted that many tourists were desirous of keeping in touch with their downtown hotels so I installed a telephone; it was the first telephone in Hollywood and it was a job bringing the pole line over from downtown Los Angeles. In a year or two I grew restive to return to Oregon (where his family was from) and did so; it was my privilege to promote the town of Weston, Oregon, doubling its population.

Hollywood called me back, and when I returned I went into the sightseeing business. The LAP was then operating the Balloon Route excursions but because of lethargic promotion only a very small business was enjoyed. I was offered the position of manager of the Ballon Route and accepted. I took charge of the Balloon Route Trip on the day before Thanksgiving, 1904.

LAP had turned over the parlor car #400 to this trip; the car was somewhat ornate on the outside with electric lights around the roof as was customary with excursion cars in those days. But the inside had no fixed seats, just folding camp chairs. We went to work assembling a staff of guides and advertising men. For guides I hired big men of commanding presence. When they said anything, the people listened. The advertising men drummed up business for us. We printed thousands of circulars describing the attractions of our trip and these the advertising men distributed. One man made the rounds of the large downtown hotels, another rode the Catalina steamer daily, and another rode other excursions, such as the Santa Fe’s Kite Trip.

“I remember the trouble the largest of the hotels tried to give us. The Angelus Hotel objected to our advertisements being distributed in its very ornate lobby. My man was escorted out every time he entered but I decided to see what I could do. Sure enough, they kicked me out several times, but I went right back in. The manager got tired of this after awhile and we worked out a plan whereby my circulars got through to every Angelus guest.

“These advertising bombardments brought results. Our Balloon Route Trip caught the public fancy as it should, because we gave them the best trip for their money. The old ‘400’ wasn’t nearly big enough and we hired more cars and crews; we used to pay LAP $15 a day per car at first, then this went up to $20 and finally to $22.50. We had an arrangement whereby we reported to the dispatcher by 5:00pm the number of cars we thought we’d need the next day. He then arranged with Sherman car house to have that number of cars at the station in the morning. I had authority to take over any car at the station and add it. Despatcher Rodenhouse was very cooperative with me and we generally had enough seats.

“At first we operated cars singly, but we did use trailers. We had big banners made and every car we used carried a sign letting everybody know what it was. When the big ‘700’s came, we could operate trains and we did when necessary. In fact, the first four-car train ever to operate out of Hill Street Station was one of our Balloon Route specials. It carried the last of 18 carloads sent out that day, which as I recall was our record day. “We always went to Hollywood first and there our principal stop was at the studio of Paul Delongpre, the world famous flower painter. We backed our cars into the spur at our freight station across the street from his home, which stood on Hollywood Boulevard where the Warner Brothers Theater is today. There the cars waited while our excursionists visited Delongpre.

“Then on we went to the Old Soldiers’ Home which was another prime attraction. There we lined our passengers up on the steps of the dining hall for their picture. Our photographer left us then and rode downtown on a regular car, developed and printed his photos, boarded a regular car for Vineyard, met us later there, boarded our cars and sold his photos.

“We took them out on the Long Wharf and they got a big kick out of that. We said it was the only ocean voyage in the world on wheels—and never any seasickness.

The Camera Obscura at Santa Monica was our next stop and this always impressed. In fact, I understand the city of Santa Monica is constructing a new building to house this unique attraction so it will no doubt be with us for many years to come.

“Then on down the coast to Playa del Rey Pavilion for a fish dinner. I leased this pavilion from LAP and paid the company 10% of what I took in. I put in a good cook and fixed up the dining room and did a good business. We also gave them boat rides in the lagoon and made our larger skating rink available at a small fee.

“We then left for the pleasant ride down to Redondo and famous Moonstone Beach. In those days moonstones were sought after and many of our guests turned up excellent specimens after only a short search. These they could later sell, for stores bought them by size, or they could have them polished for a half dollar and have something very nice.

“From Redondo we rode back up the coast to Venice where we stopped for an hour or so to let our people look over the canals, the pier, the Ship Cafe and the numerous other attractions of that most impressive beach undertaking. Then back to our cars for a fast run home via Palms.

“I liked the sightseeing business and knew how it should be run, so I branched out. At the peak I operated 26 different excursions from San Francisco to San Diego. We called them all Balloon Route Excursion Trips; in San Francisco alone I managed eight Balloon Route trips, including the Mount Tamalpais Trip, the Big Tree Trip, the Mare Island and Bay Trip, an auto trip to Golden Gate Park, a “Balloon Shaped Trip” which visited the Mint, Golden Gate Park, Lands End, all for .75¢—the “Dollar Diamond Trip” which took in Berkeley and Oakland—and others. All these left from our San Francisco office at 789 Market Street.

“Other trips I operated in Los Angeles were the “Seeing Los Angeles” observation car on Los Angeles Railway, the “Inside Track” to Riverside and Redlands on S.P., and the “Chinatown Trip.” We operated a steamer trip to San Diego, charging five dollars the round trip including berth and meals.

“In San Diego I operated seven Balloon route Excursions, including Old Mexico, Coronado, Point Loma, La Jolla, San Diego Mission and others. These were handled from our San Diego office at 1340 ‘D’ Street.

“Of course I hired trusted managers to take immediate charge of the San Diego and San Francisco trips, but I made the rounds often enough to be sure they were giving the folks our usual high standard trips.

“We emphasized five reasons why people should go on our trips:

You see it all.
You see it right.
Will save you time.
Will cost you less.
Our guides are sightseeing specialists, making the trip one of education, comfort and pleasure.

“But the LAP trip was our most famous. I can hear those spielers now: ‘Balloon Route Excursion—not up in the air but down on the earth. The Scenic trolley trip, goes one way and returns another. A hundred and one miles for a hundred cents. One whole day for a dollar. Thirty-six miles right along the ocean shore. The only way to see it all and see it right.’

“Every one of our men wore white caps with ‘Balloon route excursions’ on them. We were proud of our excursions and made sure the public knew we were proud. We ran a taut ship, as the saying goes.

“After the 1911 merger, the Pacific Electric itself took over the management of its various trolley trips. I remained in the sightseeing business for several years, going over to automobiles and finally to airplanes. But across the years my fondest memories are of the old LAP trolley cars running down country, one after another, taking our tourists down to the beaches and back again.

A relative of mine once wrote a poem which we used extensively in our advertising as I think it captures a great deal of the spirit of the Balloon Route Excursion; I’d like to conclude by quoting this poem to you:

“Away in the merry Southland,
Far down where the oranges grow—
In the land of the great busy city,
Where angels were lost long ago—
There’s a way to forget your troubles,
For a day to be brimful of fun,
And the jolly balloon Route Guide
Will show you how it is done.
“Not up in the air he takes you,
Though you’d think you’d left the earth
For weariness, trouble, sorrow or care
Have no place in this car-load of mirth;
Then away and away he will speed you,
Through fairy land down to the shore;
Then back to real life he’ll leave you at nights,
With a feeling, yes a longing, for more.”

Our thanks to Mr. Pierce for his recollections.