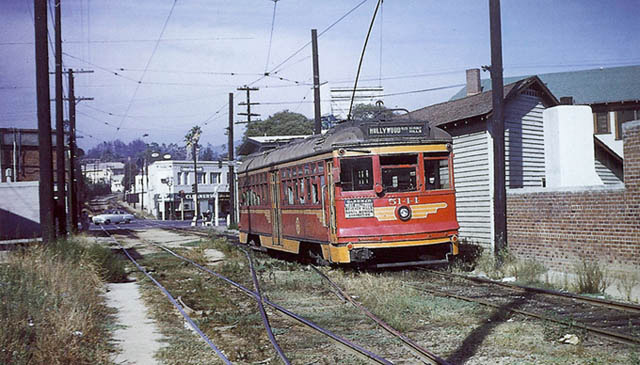 Like some animal or human being caught up in a slave labor situation, PE no. 5144 (now operated by “slave masters” Metropolitan Coach Lines) is beginning to show the effects of a 100% lack of cosmetic maintenance policy. It’s the summer of 1954, and the once-lustrous red and orange paint on 5144 is starting to fade. The entire infrastructure of the once well maintained Pacific Electric Railway is now going completely to HELL, as evident by the condition of the right-of-way here at Gardner Jct.

Every piece of rolling stock on both the Southern and Western Districts was now on an “RTF” (run til failure) operational policy. If any Hollywood car or Blimp had any mayor mechanical or body calamity, its days as an operational vehicle were over! Only the PCCs on the Burbank line were given any type of body repair by the shop forces at the Toluca Yard “Central Maintenance Facility”.

MCL’s owner Jessie Haugh was Hell bent on destroying the last remnants of the once great Pacific Electric Railway. Try as he did, he could only scuttle the Western District. As hard as he tried, the Southern District held on under dire “maintenance” conditions. The final death blow to the Southern District was left to the first LAMTA.

After the abandonment of the Hollywood Blvd line in September of 1954, the service life of 5144 was over, with the front gate of National Metals & Steel on Terminal Island awaiting the arrival of 5144 and about 100 of its sister Hollywood cars. Only a hand full of Hollywoods still in service on the Glendale – Burbank and Watts lines remained in service. By the end of 1960, the days of most of those remaining Hollywood cars was over too.