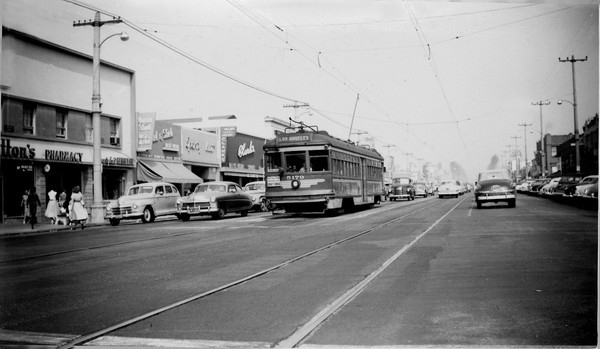 Ever vigilant and prolific photographer Alan K. Weeks snapped this photo of Hollywood car no. 5179 on Sept. 27, 1952. Time was running out for the San Fernando Valley Line, so Alan Weeks was out to document on film, the last months, weeks, and days of the line, and unknown to him at the time, the photo he took of 5179 on Van Nuys Boulevard would be one of the last times the 5179 (the former no. 729) would ever be seen alive and active with that number again.

The San Fernando Valley Line was abandoned on December 28, 1952, followed shortly thereafter by the abandonment of the Santa Monica Boulevard Line on May 31, 1953. In just 6 short months, about 45 Hollywood cars used on the two lines were made surplus. Only about 40 or so Hollywood cars remained in service on the Western District’s last two lines: Hollywood Blvd./Beverly Hills and the Glendale-Burbank Lines.

A few weeks before the Santa Monica Blvd. Line was abandoned, eight surplus 5050-numbered Hollywood cars already in dead storage were sold to the Portland Traction Co. The total rail abandonment of the Northern District in September of 1951 put about 77 Hollywood cars out to pasture. Cars 732 / 759 were sold to Buenos Aires in 1952. As previously discussed, eight randomly picked 5050s left gaps in the 5050 to 5099 numbering records. So PE took cars #5174 to #5181 and renumbered then into the missing 5050 numbers, car 5179 amongst them.

After the December 1952 SF Valley Line abandonment, the 5179 just seemed to disappear, The 5179 became II-5076 and I do not believe the II-5076 ever operated again during the last two years of the Western District. The 5179, only 27 years old, with decades of service life remaining, simply disappeared bearing the number 5076. Just for the record, 5181 became II-5099. Any photos of the eight 5050-numbered cars operating on the Western District between June 1953 and June 1955, should be classified as “significant.”