This photo taken around 1947 shows speedster no. 1219 in the ditch after smashing into a large tractor-trailer rig on the notorious Santa Ana line. The 1219 and train were properly rolling along at a “mile-a-minute” clip when the big rig loomed at a crossing on the track ahead. One can only imagine what the motorman must have shouted out loud (OH +#^*!!) as he threw the 1219 and train into the “BIG WHOLE” and braced for the inevitable crash and “pile up.”

With no “PA” systems on the trains back in those days to warn of the impending disaster, passengers on both cars could only hold onto the seat frame in front of them while the conductors on both cars must have tumbled down the isles as the emergency brakes were activated. The partial remains of the big rig can be seen in the photo. Both the 1219 and the 1262 came out of this mess in better shape than the truck. Both cars would live on for a few more years. The entire 1200 class, save for 1299, were scrapped at Kaiser Steel Fontana in 1951, ending a distinguishing career of PE’s finest interurban cars. 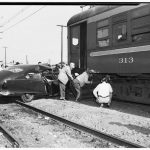 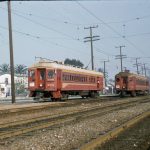