I took this faded photo with my little KODAK box camera on the afternoon of June 7, 1959 at the rear of the Watts car barn.

When the fan trip reached Watts, we switched into the Watts car house tracks and proceeded to rear of the storage track area. And there sat my favorite Hollywood car, LAMTA 1815 (PE 717 / 5167). It had been “out of service” for a few weeks for an unknown reason. We pulled the 1546 up next to the 1815 and I and several others (with much better cameras) took this historic photo. I had dreams of some how saving up enough money to purchase the 1815 some day. But at age 16 and with a meager income from selling Herald-Express newspapers, my dream seemed unreachable. All I could hope for, was that someone would save this handsome car from the scrappers. Thank heaven for WalterAbbenseth aka Mr. PE. Not only did he save my favorite 1815, but three others including 1815s sister car 1814 (PE 716).

Who would have ever guessed on that day, that just a few years later, it would be possible to photograph these same two cars, side by side, some 80 miles away from Watts at Perris Calif.? Both cars now live on in active retirement at OERM to the thrill of thousands of visitors and rail fans alike. Long live these two remarkable cars. 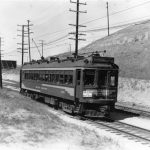 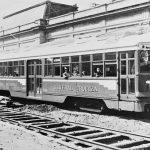