This photo taken in mid-1951 shows the result of a grade crossing accident on the Bellflower Line. Pacific Electric no. 313 smashed the hell out of the 1950 Nash Airflyte sedan that dared to challenge the 313 at one of the many 45-degree crossings on the Bellflower Line. In the photo, the motorman and others inspect the minor damage to 313’s steps and the safety light bulb.

Before the line was cut back from Santa Ana, accidents on the Bellflower-to-Santa Ana portion of the line were numerous and severe. Most often, hay trucks and other large commercial vehicles were involved. The drivers of these large vehicles seemed to be oblivious to the high speed of the PE trains.

To make matters worse, east of Watts, just about every grade crossing on the line was at a 45-degree angle. At best, these crossing were “protected” by worthless “wig-wags” and at worst, wooden cross bucks. The line between Bellflower and the Santa Ana city limits saw some of the highest speeds on the PE system. Before 1950, regular equipment of the Santa Ana line was usually provided by 10s, 12s, and “hot rod” Blimps. All three classes were capable of speeds in excess of 55 mph (Blimps) to about 65 mph (10s and 12s). The 45-degree angle crossings may have been responsible in part for all the carnage.

But even after the line was cut back to Bellflower, accidents never stopped, but more often than not, by this time, autos were the victims of the Blimps that stalked the line like hungry lions in the automotive jungle. The 1950 Nash was eaten by the 313, just one of many that fell victim to the hungry, marauding Blimps. 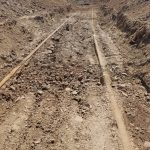 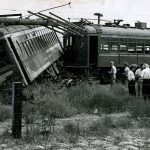