Destined For A New Life (Albeit A Short One) 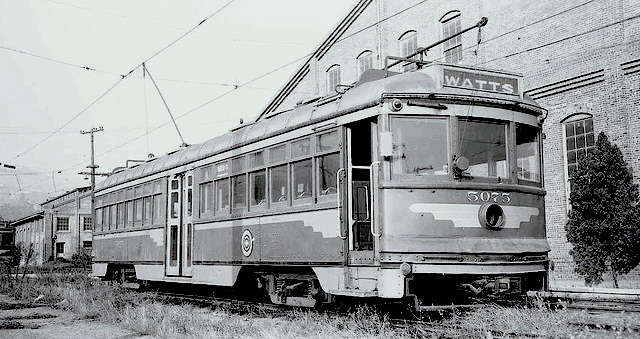 Pacific Electric car no. 5075 , the former no. 674, is seen here at West Hollywood yard, looking rather shabby, preparing to head for Torrance Shops, in this 1953 view.

For reasons known only to the PE, car assignments where the Hollywood cars were concerned, seemed to be very strict. “In General”, cars 5050 to 5099 had been assigned to the Northern District, along with cars 732 to 759. Cars 5100 to about 5130 were found on the WATTS LINE after the Sierra Vista portion of the line was abandoned. Cars 5131 to 5181 worked the Western District.

After the abandonments of the San Fernando Valley and Santa Monica Blvd lines in 1952-53, many Hollywoods would go into dead storage whereever space could be found, with little regard to vandalism protection. The Hollywood and Glendale-Burbank lines now operated with the cream of the remaining crop, cars 5150 to 5181, all Brill 700s .

However, when it came to the first batch of Hollywood cars to go through the renumbering program, it was done as if all the numbers of cars 600 to 699 were put on “bingo balls,”, placed in the rotating basket, and what ever number dropped out of the basket first, became car 5050, which was car 694. Anyone into the renumbering aspect of the hobby would have thought that car 600 would have been the “logical choice” to become car 5050.

The renumbering of cars 5050 to 5099 was done as if it were a bingo game. BUT, again, the PE proved there was some type of order to their “numbering system.” When car 5075 and seven other 5050s were sold to Portland Traction Company, the PE, not wanting to have “gaps” in their sophisticated numbering system , simply took cars 5174 to 5181 “off the top” and renumbered them into the missing 5050 car numbers. In this way, PE’s “computer system” would not crash when it came to car assignments.

In all the photos that I have ever seen of the Western District during the last two years of operation, I have NEVER seen a photo of any of the renumbered 5050s working the Hollywood or Burbank lines. What happened to those renumbered 700s is anyone’s guess. They may have gone into early retirement, simply because all the other 5050 numbered cars were out of service. MAKES GOOD SENSE TO ME!!

As for car 5075, it was put through Torrance Shops, repainted into Portland Traction Co. red & cream , renumbered 4019 and sent on its way. Once in Portland, the eight Hollywood cars were used as a “stop gap” tool to prolong the life of the decaying Portland Traction Co.

The eight Hollywood cars arrived in Portland with gleaming paint jobs in 1953. By the time service was abandoned just five short years later, the cars looked like HELL… One of the eight cars was saved and is now at the Sea Shore Trolley Museum, the other seven were scrapped.