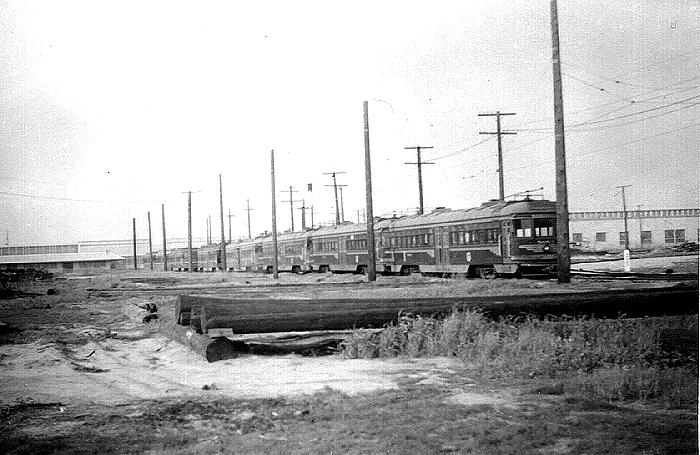 Pacific Electric’s Torrance Shop complex could rebuild just about any rail car or bus on the PE roster. Master craftsmen capable of working with wood and steel bodied rail cars could do just about anything PE management asked of them. Major car rebuildings were commonplace at this vast 26-acre facility.

But beginning in late 1950, Torrance Shops took on a different task, and that was the storage and scrapping of retired PE rail cars. With the completion of 131 Hollywood cars to one man / two operation in 1950, Torrance Shops took on a morbid scene of interurbans, both wood and steel, awaiting their final fate. Rows of tracks that once held beautifully refurbished cars waiting to re-enter service began to hold may of those same cars awaiting a different destination — that being National Metals & Steel on Terminal Island.

The very last rail cars to go through Torrance Shops and leave under their own power were the 30 PCCs in mid-1952. Not long after the last PCC left the paint shop, the first prematurely retired Hollywood cars began to arrive. Most of these early retirees were recently displaced cars of the 5050 to 5099 numbers block from the Northern District’s 1951 abandonments. These 50 cars had just left the paint shop 18 months earlier. The cars were in virtually new condition. PE’s magnificent 1200-class interurbans had just been hauled away to Kaiser Steel in Fontana for cremation as the first Hollywood cars began to arrive. Gone already were the beautiful classic 950s and 10-hundreds. Unneeded shop men were let go as there were to be no more car rehabilitation programs to perform.

Major rail abandonments occurred on a yearly bases, starting with the Venice Short Line in 1950, the entire Northern District in 1951, the San Fernando Valley Line in 1952, Santa Monica Boulevard line in 1953, Hollywood Boulevard in 1954, and the Glendale-Burbank line in 1955. Surplus Hollywood cars were stored everywhere on the Western and Southern Districts.

Some Hollywood cars had been sold for continued operation elsewhere, but the time had come for the disposal of these wonderful cars, regardless of the age or condition.

In this sad photo taken in early 1955 at Torrance, car no. 5084 heads up what seems like an endless line of “out-of-service” Hollywood cars. All were in PERFECT CONDITION and ready to go back in service, but woulud never again carry a Los Angeles passenger. They all had a date with the scrap man. More than 100 Hollywood cars would be sent to scrap in one horrible action.

As for Torrance Shops, its days were also numbered. In late 1953, Metropolitan Coach Lines leased the paint shop for a mass repainting of PE buses from RED to two tone GREEN. When that program was completed, Torrance Shops were DONE and the property put up for sale. In just five years, Torrance Shops had gone from being a bustling maintenance facility to a ghost town, and hundreds, if not thousands of master craftsmen put out to pasture.

A sad ending for the PE and EVERYTHING that it was. 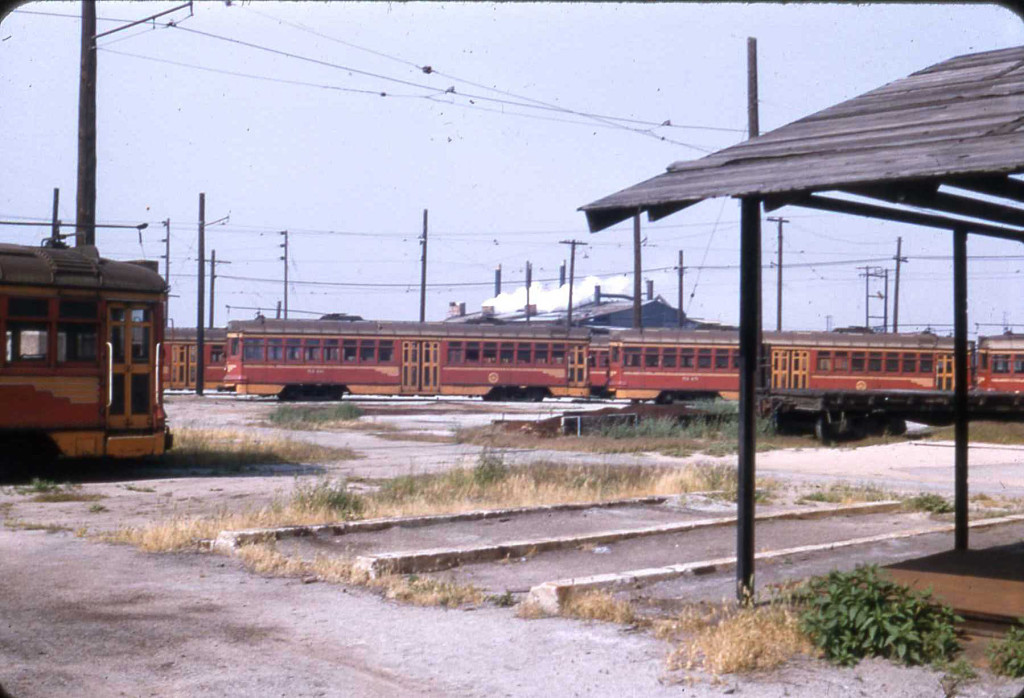 Like unsuspecting cattle waiting to be loaded aboard trucks that will take them to the slaughterhouse, Pacific Electric Hollywood cars at rest at the Torrance Shops circa 1955. Some had been in dead storage almost five years by this time, all of them in somewhat weathered, but other wise one hundred percent complete and functional, ready to go back into service by simply raising their trolley poles.

They wait, but the call to service will never come.

Instead, the slaughterhouse truck, in the form of an SP Diesel switcher, will arrive to take them to Terminal Island and their doom.