Most archivists I know have had the pleasure of moving into a space to take over a collection and make it available for use. However, what happens when the collection evolves from a hobby and becomes a premier source for research and publication? Such is the case with the Mount Lowe Preservation Society collection.

Being a third generation native of Southern California, my wife and I have always had a love of local history. We loved antique stores and looking for cool old objects. Among our early trips was hiking in the local San Gabriel Mountains and learning of the Mount Lowe Railway, formerly known as “Earth’s Grandest Mountain Ride.” This local funicular (1893-1936) was not known to us and our curiosity had been tickled. There had been four hotels, a dance hall, a zoo, the world’s largest searchlight, and premier dining, all in the mountains west of Mount Wilson, above Altadena and Pasadena; serving nearly four million guests.

By 1902 Henry Huntington and the Pacific Electric Railway had taken over and made it part of the 1,100 miles of track which covered most of Southern California’s four counties, including Los Angeles, Orange, San Bernardino and Riverside. The “Big Red Cars” ran up until the early 1960s and had always been of interest to rail fans and historians, but now has taken on new meaning for younger generations with the implementation of the Los Angeles Metropolitan Transit Authority (MTA) light rail lines that generate out of downtown Los Angeles; some of which are on former PE right-of-way land.

By 2000, the non-profit 501(c)3 Mount Lowe Preservation Society, Inc. was formed with a modest collection of images and artifacts. In 2007 we were donated the archives of the Pacific Electric Railway Historical Society. In 2011, we became members of the Society of California Archivists and purchased a 14,000 square foot building in Pasadena to house our nearly 40,000 images and nearly 4,000 three dimensional artifacts.

While we renovate and prepare the building, we have begun moving some of the artifacts into their new home and while the collection is still small by comparison to other collections, we are constantly on the lookout to obtain more materials within the realm of Southern California transportation.

Having spent a day with the SCA in Ventura earlier this year, we made a few good contacts and learned a thing or two about caring for our collections. The materials have been the primary source material for four books by Donald Duke on the Pacific Electric Railway and four books by myself, Michael Patris; two of them co-authored with our Curator of Photography, Steve Crise. One of the books we did, Pacific Electric Railway, Then and Now (Arcadia Publishing, December 2011) is in its fifth printing and has been the inspiration for a show which opened last month at the Pasadena Museum of History, titled the same as our book, Pacific Electric Railway, Then and Now, which runs through January 13, 2013. We look forward to meeting more of SCA’s members and being able to ask advice in caring for and curating our collections.

Nearly 3,000 of the Pacific Electric Railway Historical Society images have been digitized and can be seen at www.peryhs.org and the Mount Lowe Preservation Society collection can be viewed at www.mountlowe.org. The information on the show of our images at the Pasadena Museum of History can be found at www.pasadenahistory.org/thingstosee/PacificElectric.html

If anyone out there knows about a collection needing a home or have some images not suited to their collections, please contact us. 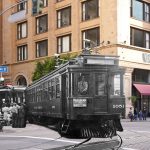