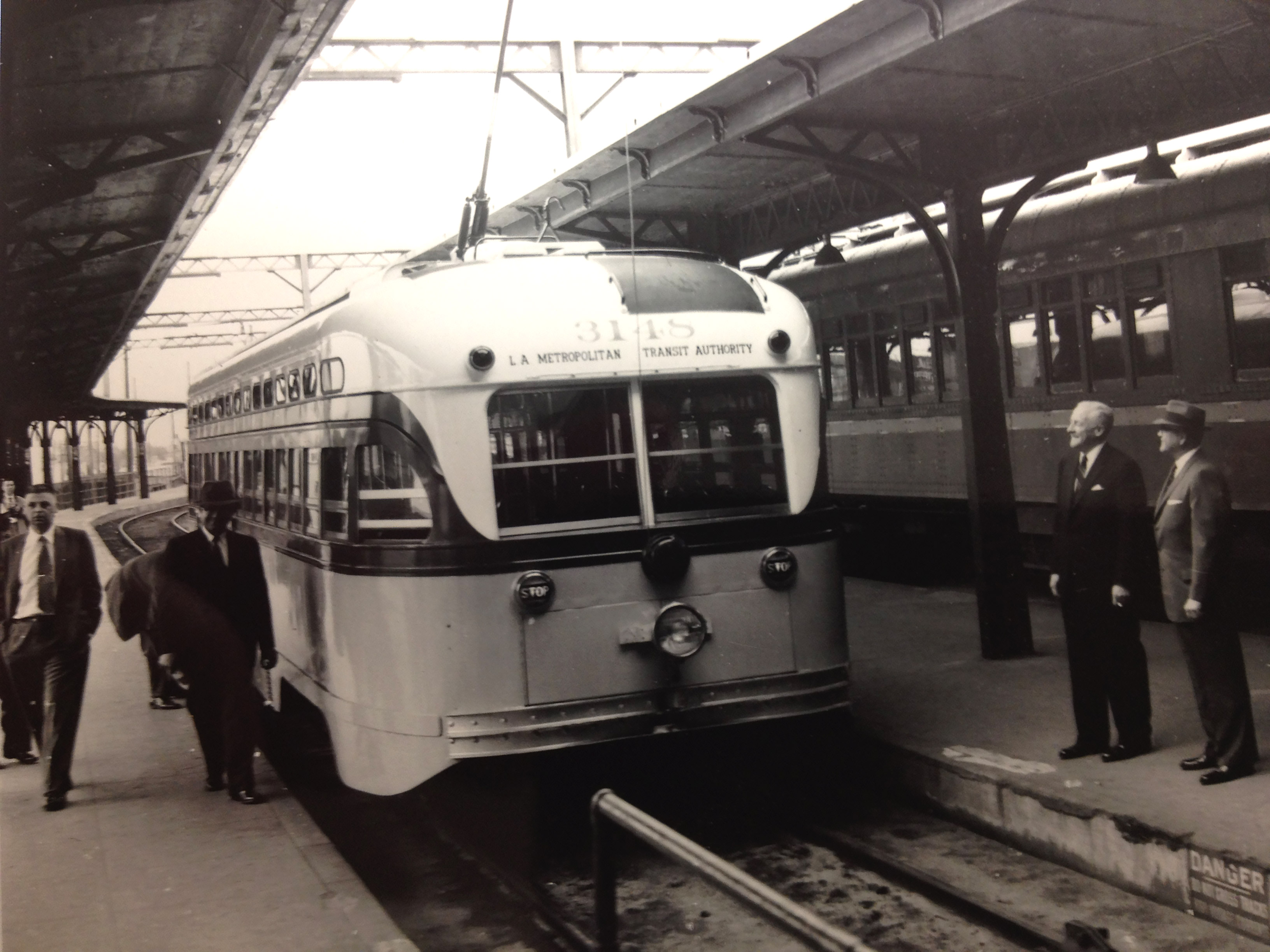 From transit fan CJ Milch comes this image and the following description:

It’s obviously at 6th and Main terminal on the northern side of the back elevated structure. Apparently a few Big-Wigs in suits looking on. Note the tacked-on back headlight that was likely fashioned up at an LAMTA shop. I also believe that this car also had a much longer trolley pole installed; the PCCs were not as tall as other cars and hence needed the added length to reach the catenary. No. 3148 sure looks out of place, but judging by the clearance to the platform it would have been easy to step aboard as opposed to climbing the stairs on the Blimps.

The big question is where they turned the car. It would be very difficult to back the car from Long Beach as the back up controller and brake are located behind the rear bench seat at the back of the car. One has to sit side saddle or kneel on the seat with your right hand on the controller, and your left hand out through the open back window with a grip in the trolley as a precaution against a de-wire and the pole springing up and catching a span wire holding the over head. And, you have to take out a gong pin stored in the seat back and drop it into a hole in the floor to ring the rear bell. (I’ve done several times at OERM on the 3001, 3100 and 3165 PCCs preserved there – it’s part of Qualifying on each car.) I’m sure this car had a trolley shoe and not a wheel on the end of the pole as LAMTA only had a few work cars equipped with trolley wheels left on them.

Other than this, I have no exact date nor indications of who the dignitaries may have been. I hope others can fill in more details. Let’s see what others know!

We turned to transit historian Ralph Cantos, who of course had the answer immediately!

For a few weeks in mid- February 1960, the LAMTA ran car no. 3148 on borrowed standard gauge trucks (SF MUNI no. 1024). The MTA ran the 3148 up and down the Long Beach line for tests to see if PCCs could be used to replace the Blimps. In reality, the whole damn thing was a scam. The MTA never had any intention of keeping the Long Beach service as a rail line. It was all a bunch of BULLSHIT!!! Just over a year later, the LB line was abandoned.

So there we have it! Thanks to CJ and Ralph for opening and settling this mystery! 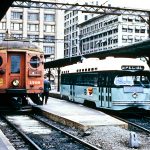 LAMTA at 6th and Main in ColorHeadquarters, Jack Whitmeyer Collection