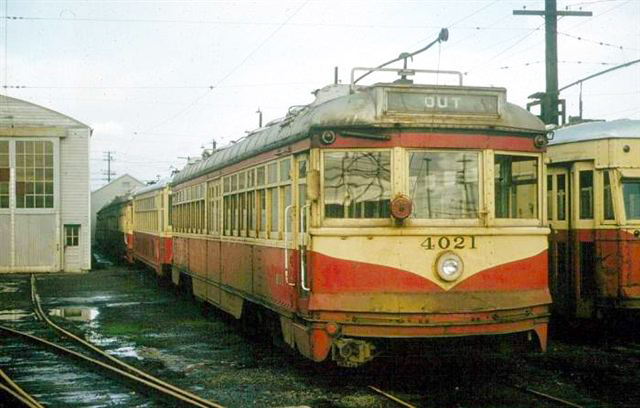 When the City of Los Angeles and the Highway Department ganged up on the Pacific Electric and condemned Aliso Street for Freeway construction, that effectively killed off PE’s entire Northern District rail operations. Given the dire financial condition of the PE at mid-20th century, it probably came as a blessing to parent company Southern Pacific, eliminating the need for lengthy PUC abandonment proceedings. (This short sighted decision on all parties concerned, would come back to haunt Southern California commuters at the dawn of the 21st Century.)

The abandonment of the Northern District spelled doom for the magnificent 1200-class interurbans along with most remaining trusty wooden 1000-class cars. At the same time, 50 recently refurbished 5050-class Hollywood cars and 27 two-man 732-class Hollywoods were done, finished!! Most, if not all cars numbered 5050 to 5099 were placed in dead storage at West Hollywood.

The 27 unmodified 732-class Hollywood cars were quickly purchased by Buenos Aires in early 1952 even before rust had formed on their wheels. A short time later in early 1953, Portland Traction Company picked up 8 very nice 5050s at bargain basement prices. The 8 spruced up Hollywood cars entered service in Portland amid much civic celebration. Their career in Portland should have lasted 20 years or more, paving the way for Portland’s new Light Rail Transit system, but it was not to be.

This photo from the Joseph Testagrose collection (taken in January 1958) shows Portland Traction no. 4021, the former PE 673 / 5076, after abandonment. The 8 Hollywoods had been in service in Portland less than 5 years. Seven of the eight cars would be set afire and scrapped shortly after this photo was taken. Only the 4022 (PE 680 / 5069) was saved for “preservation”.