In going through some of my father’s collection, I found this interesting “bus transfer” and thought it should see the light of day.

Here are two (front and back) scans of what appear to be an effort to defeat ballot proposition No. 1 on the December 12, 1940, election in Los Angeles. Although there is no specific mention of Los Angeles, or the year, the fact that the 1940 UCLA football schedule is printed on the face leads me to this conclusion.

It is in a transfer format similar to that used by the Pacific Electric and I believe other transit companies of the time.

It was printed for a group calling themselves ‘Citizens Committee against “Phoney” Legislation”. The oversize dimension of 12” X 4 1/4” was apparently meant to emphasize this group’s alarm over what they believed was an effort by bus companies, (no mention of which company(ies), to create a …”universal” transfer system in Los Angeles. There is an allusion …”three bright boys”… and some names, possibly corrupted, of ….”Quinsy, Kreaking, Dilly”… .

What the results of the election were, if in fact there was an election, remain a mystery to me. Hopefully there are others that that can fill in the gaps. 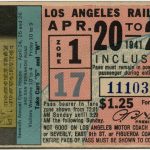 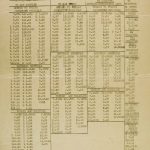