Pacific Electric No. 742: A Visitor From The Valley

As was always the case on New Years Day on the PE, it was “all hands and cars on deck.”

New Years Day 1940 was no exception. With the exception of the 100s (and, later, the PCCs), just about every class of PE’s vast assortment of interurban and suburban cars put in an appearance on the Northern District to handle the deluge of passengers headed to the Rose Parade.

Even the trusty fixtures of the Venice Short Line, the handsome 950s, would head to Pasadena.

The Valley Sevens were no exception to the migration of “out-of-towers” called upon for Rose Parade duty. In this photo taken on New Years Day 1940, Western District no. 742 heads up a three-car train as it rolls along the Northern District’s “4 track main line.”

Compared to the other as-yet-to-be-modernized Hollywood cars (nos. 600 to 734), the Valley Sevens were real speedsters. As built, the Hollywood cars had a breathtaking top speed of 28 miles per hour. You would have to drive a wooden stake into the ground with fluttering white flag next to an unmodernized Hollywood car to see if it was actually moving. The Valley Sevens could clip along at brisk 45 mph, so the passengers aboard this train will arrive at the Rose Parade in record time.

This would be the Valley Sevens’ final event in this configuration. All 15 Valley Sevens were modernized into the new “Butterfly” paint scheme in late 1940. The rest of the Hollywood cars were brought up to Valley Seven performance standards as part of the modernization program.

Northern District passengers would have to settle for slow, pokey replacement bus service in the name of progress…yeah right! 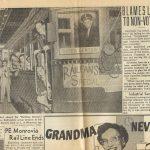