On January 31 the South Pasadena Public Library hosted Mount Lowe Then and Now authors Michael Patris and Steve Crise for a program in the Community Room.

Little did anyone know in advance, but this turned out to be a record setting event for both the library speaker program and for a single audience seeing the Mount Lowe program. 165 guests filled the room to capacity, including music legend Ian Whitcomb, until it was standing room only.

The line for autographed copies of the book snaked through the room following the show and nearly one case of books was sold. Many thanks to all the folks who attended the program and special thanks to South Pasadena’s City Librarian Steve Fjeldsted for inviting us to such an enthusiastic gathering.

This event was video taped for the local cable channel and will be made available for the Mount Lowe Preservation Society website in the near future. 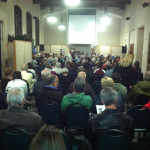 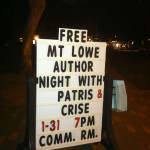