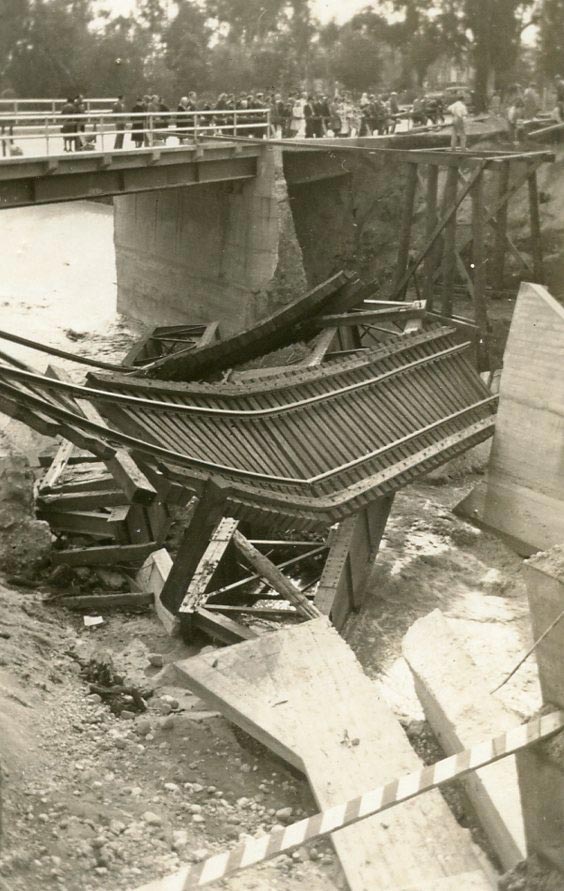 Pacific Electric right-of-way is in shambles after a major washout along Huntington Drive. The image is possibly from 1938.

All I can tell you about the next two snapshots is that one has “Huntington Dr” written on the back, but that may well be enough.  I figure it is all but certain that this washout is from the disastrous 1938 floods (one reason why LA now paves everything INCLUDING its streams and rivers).  The clothes and the cars suggest that is the right era, not to mention the amount of damage.  No overhead is visible (the poles might have been taken out too, this close to the washout) but the configuration is two tracks between two auto roadways, the “Double Drive” as Huntington was then commonly known.  The auto roadways have also been seriously undermined.

As for that guy balancing on top of one of the trestle bents, I’m not sure I want to know how he got up there (or why) or how he got down.  Looks like he was teetering up there long enough for this photographer to walk quite a distance around dubious ground to take shots from almost diametric-opposite angles, assuming that’s the same guy in both shots.  He is holding what looks like it could be a surveyor’s leveling rod and target.  The wreckage of a more sophisticated steel deck truss are still lying in the gully so I’m assuming they are putting in a quick-and-dirty trestle to get at least one roadway back in service.  Looks like a thankless job.