All Spruced Up, And Soon…No Place To Go 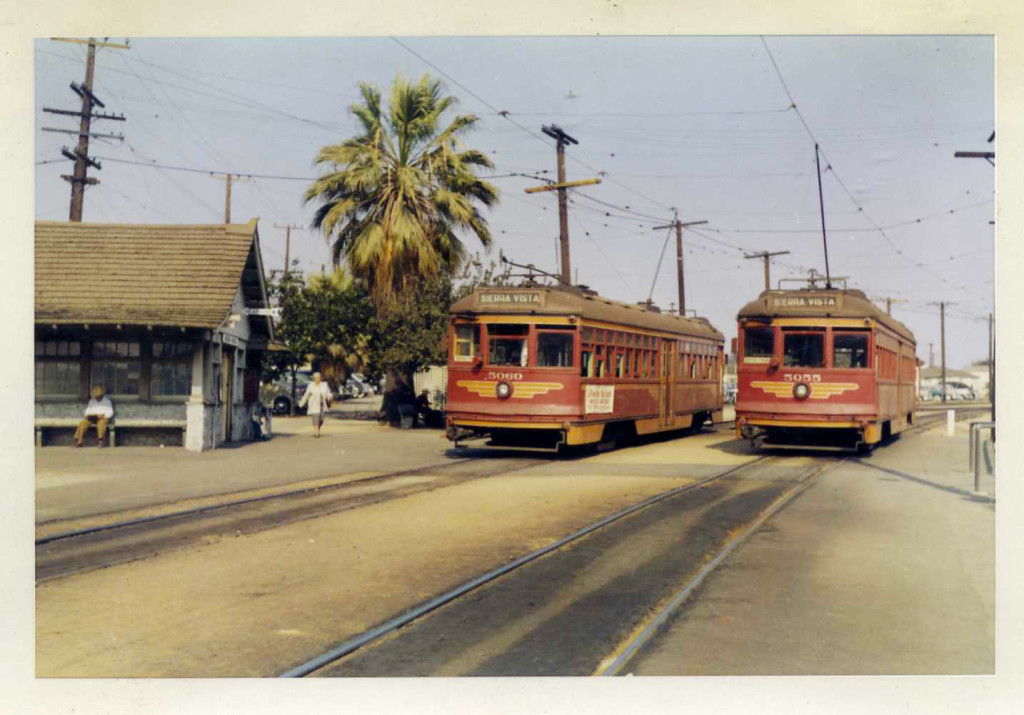 The neat, well kept Pacific Electric station at Sierra Vista looked like it could go on serving patrons of the WATTS – SIERRA VISTA line for decades to come. But in reality, this peaceful setting was on a “death watch” along with newly out-shopped cars nos. 5055 and 5060, seen here awaiting departure time at the station.

The date is September 28, 1951, and PE’s once magnificent Northern District is on the verge of total destruction, as passenger rail service goes. In just a few days everything seen here will be, for all practical purposes, useless junk and scrap metal!

The end has come for PE’s once vast Northern District. The wonderful, classic 10-hundreds were already gone, the 1100s had made their last regular runs six months earlier on March 26th, and were awaiting final arrangements to be sold to Buenos Aires.

Worse yet, the mighty 1200s, the finest interurbans the West would ever see, were stored at Torrance Shops awaiting their final trip to Kaiser Steel and a fiery cremation. The two-man 732-class Hollywood cars would also be sold and find more welcome arms along with the 1100s in Buenos Aires.

he Pacific Electric had just spent hundreds of thousand of dollars, all of it private capital, to convert 131 Hollywood cars to one man / two man operation just one year earlier, cars 5055 and 5060 among them. And now, with just days left before total abandonment, these two PERFECT, refurbished cars will face an uncertain future.

Many cars in the 5050 to 5099 class will never again carry a revenue passenger in Los Angeles.

This shameful waste was all part of the “RAILS TO RUBBER” insanity that swamped this country in the name of “Progress” in the 1950s. In place of steel wheels on steel rails, a concerted “Automotive Utopia” was promised for the the future. If anyone alive in those days could look 50 years into the future, they would have seen that UTOPIA turned into an Automotive HELL…and now “the experts” must try and put the Pacific Electric Railway back together again at a cost of HUNDREDS OF BILLIONS OF dollars…